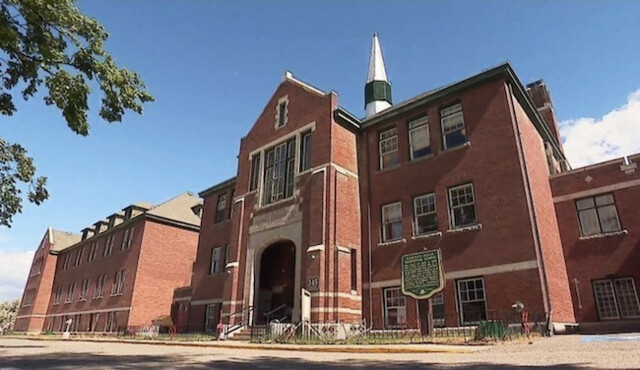 Cecilia Louis was 18 months old when she was ripped from her family and taken to the Kamloops Indian Residential School.

Louis spent the next 11 years enduring horrific abuse at the school where she was deprived of her family, her language and culture.

She was starved, beaten and verbally abused by the Catholic priests and nuns that ran the school.

But Louis persevered, eventually marrying and settling in the North Okanagan.

Meghan Harms wrote about Louis for the Athabasca University Landing.

“Cecilia’s son Leo told me his mom and dad escaped residential school and ran away to Washington State over the border. Here, they laboured as orchardists until his mother informed everyone she was going back to school. For Cecilia, it was matter-of-fact, and without fanfare,” Harms wrote.

“Cecilia was a stoic, a leader, a mother-to-everyone. She never spoke of her residential school trauma for 66 years, save for the heart-wrenching accounts she managed to give the Truth and Reconciliation Committee. For Cecilia, life was about doing what needed to be done – for her children and all her relations. Residential school never got the best of Cecilia Louis.

“Starting school is intimidating enough for those who have never been kidnapped and tortured by education. Intergenerational Residential School trauma has caused many indigenous folks to be apprehensive of settler education.”

Louis set out to become a chartered professional accountant, but died in 2018, just a few credits away from becoming a CPA.

She spent 37 years pursuing her goal amid the hardships of poverty, work obligations, raising children and fostering children of her nation.

A change.org petition has been launched to have the Chartered Professional Accountants of British Columbia recognize Louis' hard work and determination in the face of such challenges.

“Cecilia Louis was not one to give up on a dream. Our dream is for equity in education. We believe it is a tribute to the CPA-BC that she tirelessly worked towards joining them despite her racialized trauma with education and the financial obstacles towards becoming a CPA. Cecilia spent a career in Accounting for the Round Lake Treatment Centre and it is time for her work and her studies to be recognized with the designation they deserve,” a statement on the petition says.

An official statement on behalf of the Athabasca University Social Justice Committee reads:

We call upon CPA Canada and it’s affiliates to acknowledge the diverse intersecting barriers that prevent many indigenous Canadians from obtaining accounting designations. Cecilia’s 30-year pursuit of her designation highlights the geographic, financial and colonial preclusions which often alienate indigenous Canadians from higher accountancy education. This education is essential for nations to ensure their wealth is managed and protected by their own communities rather than by non-indigenous practitioners.