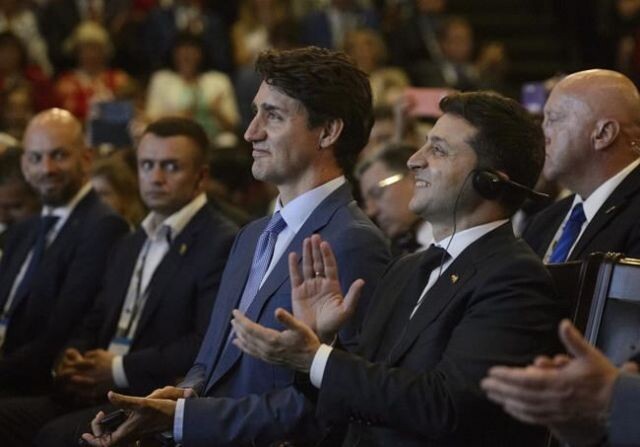 Photo: The Canadian Press
Canadian Prime Minister Justin Trudeau and Ukrainian President Volodymyr Zelensky react during a speech by Minister of Foreign Affairs of Canada Chrystia Freeland at the University of Toronto in 2019.

The president of Ukraine is thanking Canada for a $120-million loan aimed at bolstering his country's economy amid a hostile buildup of 100,000 Russian troops along its borders.

Volodymyr Zelensky, through a statement issued late Friday by the Ukrainian Embassy in Ottawa, says the loan represents another example of the "special partnership" between the two countries.

The brief statement, written by Andrii Bukvych, Ukraine's charge d'affaires to Canada, says Ukraine is grateful to Canada for working with international partners to provide financial support and make it clear Russian aggression "is absolutely unacceptable."

The statement goes on to say Ukraine remains optimistic about receiving other support, which could include unlocking export financing tools and technical assistance in fighting ongoing cyberattacks.

Earlier on Friday, the embassy issued a blunt statement calling on Canada to provide weapons to Ukraine's military and to impose further sanctions on Russia.

That statement was Ukraine's initial response to Prime Minister Justin Trudeau's announcement of the loan, which he billed as one of the "top things" Ukrainian officials had asked for during their meeting earlier in the week with Foreign Affairs Minister Mélanie Joly.