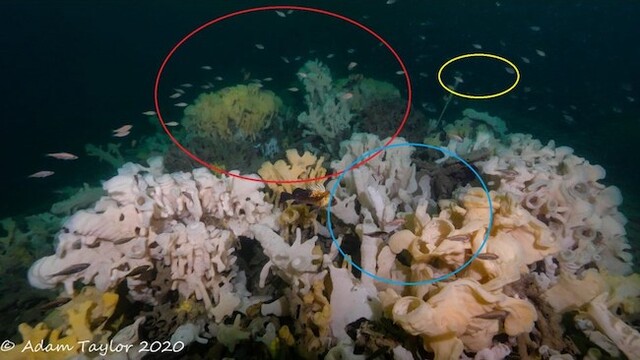 As conservationists and researchers celebrate the announcement of new protections for five more glass sponge reefs in Howe Sound, several societies are also calling for more enforcement in the fragile habitat areas.

Below the surface of Howe Sound lies an ancient and globally unique ecosystem previously thought to be extinct: the glass sponge reefs.

As their name suggests, these forms of marine life are particularly fragile, building their skeletons out of silicon dioxide, but create a habitat for marine animals including salmon, rockfish, herring, halibut and sharks. They also store carbon and filter more than 17 billion litres of water. And Howe Sound, Ocean Wise Research Institute’s website says, “is exceptionally special in having the only known reef-forming sponges in water shallower than 40 metres.”

In 2020, Fisheries and Oceans Canada confirmed the discovery of five new living glass sponge reefs in Howe Sound with the help of the Marine Life Sanctuaries Society of BC.

Now, as of Jan. 17, DFO has declared additional fishing closures, prohibiting all commercial and recreational bottom contact fishing for prawn, shrimp, crab and groundfish in order to protect those five glass sponge reefs. A buffer of 150 metres around the reefs prevents sediment plumes from such fishing – by trap, trawling or line – from affecting the sponge reefs by “choking” them.

Starting April 1, downrigger restrictions for recreational salmon trolling will also be applied to the five sites as well as the Howe Sound-Queen Charlotte Channel marine refuge.

The fragile, slow-growing reefs need to be protected from direct contact with fishing gear, and the disturbance of sedimentation. Since most of the reefs’ mass sits above the seafloor, “Even just a hook on a fishing line pulling the top of one of these sponges can topple it over,” Adam Taylor of the Marine Life Sanctuaries Society of BC said.

Besides contact damage, the sponge cannot feed and filter on its side as well as it can in an upright position, and it can die. A prawn trap or line connecting traps, Taylor said, can cause “catastrophic damage.”

The new closures cover a total area of 5.2 square kilometres and include portions of Alberta Bay near Lions Bay, Carmelo Point off south Gambier Island, Langdale near the ferry terminal, Mariners Rest on the west side of Gambier and Collingwood Channel between Keats and Bowen Islands.

A notice on DFO’s website states that these closures “will be in effect for the long term,” but the Canadian Parks and Wildlife Society – British Columbia notes they are not permanent, and is calling for stronger protection and enforcement for the fragile marine life.

The group’s oceans campaigner and glass sponge reef expert Carlo Acuna said they are thankful to DFO for creating the fishing closures, which took about two years since the reefs were verified in 2020. DFO consulted with environmental, community and fishing groups, although part of the process was delayed by the pandemic. But CPAWS would like to see stronger, more proactive enforcement and monitoring to prevent the damage to the reefs in the first place.

“When they are broken, it will take hundreds of years to grow back,” Acuna said. “That was really evident last year.”