Weapons, drugs and cash seized by Penticton RCMP in Naramata 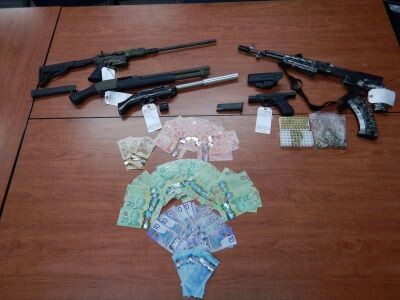 Penticton RCMP executed a search warrant and seized drugs, guns, weapons and cash in Naramata after a month-long investigation.

On Tuesday, with the assistance of several support units including the Emergency Response Team, RCMP executed a search warrant on a residence located in the 1100 block of McPhee Road.

During the search of the residence, police located several restricted, prohibited and illegally modified firearms as well as conducted energy weapons, cash and drugs.

A 42-year old Naramata man has been arrested and will be appearing in court in May, for numerous charges which are expected to include weapons related offences.

“Penticton RCMP is committed to watching the behaviour of known criminals in the South Okanagan and continually monitoring their behaviour and its impact to public safety. These firearms and prohibited weapons posed a significant risk to the general population of not only the South Okanagan but to all British Columbians. It is a relief to get them off the streets and negate their potential to inflict harm,” said Supt. Brian Hunter, Penticton South Okanagan Similkameen RCMP.

“More importantly, it was imperative to the RCMP to get them out of the hands of people who had no lawful excuse to possess them and were likely to use them to commit violent crimes.”

Anyone with information related to criminal activity in your community is reminded to contact the detachment at 250-492-4300.