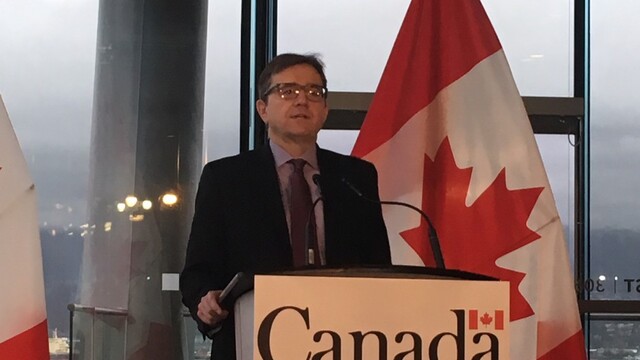 Photo: Contributed
'I believe that natural resources will continue to be of central importance in driving growth and prosperity for Canada' -- Natural Resources Minister Jonathan Wilkinson

Anyone paying attention to Europe’s energy transition and current energy crisis may draw a sigh of relief from the assurances given Wednesday by Canada’s new Natural Resources Minister, Jonathan Wilkinson, during a keynote address at the BC Natural Resources Forum.

Canada, he said, will not follow the same path European countries have taken in their own energy transition, which has recently contributed to a full-blown energy crisis.

Canada’s wealth of natural resources, abundant hydro-electricity and clean-tech know-how will allow it to plot a “uniquely Canadian” approach on the road to net zero – a course that recently earned the praise from the chief of the International Energy Agency (IEA).

Moreover, the energy transition will happen in different ways region by region, he said, depending on each region’s strengths and natural resources.

Whereas Alberta and Saskatchewan may harness their natural gas to produce blue hydrogen, using carbon capture and storage, Quebec is more likely to make green hydrogen from its abundant water and hydro power, for example.

Carbon capture and storage (CCS) will also necessarily play a significant role in Alberta, which faces the biggest challenge in reducing greenhouse gas emissions -- owing to the fact its oil and gas sector accounts for 26% of Canada’s emissions – while continuing to have an oil and gas industry.

Professing a dislike for the term “just transition,” Wilkinson said the energy transition should not be viewed as one that replaces high-paying roughneck work with lower paying green jobs or threatens Canada’s resource industries.

“Historically, Canada's natural resource sectors have played a major role in Canada's economic success and its prosperity,” he said.

“These industries have been, and continue to be, extremely important to our economy. They support a significant chunk of economic activity and they employ many, many thousands of Canadians.

“I believe that natural resources will continue to be of central importance in driving growth and prosperity for Canada.

“There are those who believe that there is an inescapable tension between natural resource development and climate action -- that what's good for one is inevitably bad for the other. My key takeaway for you today is that, not only is that not true, the opposite is true.

“In many cases, in my view, the jobs of the future will not look that much different from many of the jobs that exist today. A hydrogen production facility utilizing carbon capture technology will not, in terms of the required skills, look very much different from an existing refinery.

Far from a lack of resource sector jobs in a greener economy, Wilkinson said he fears there may not be enough skilled workers to fill all the new jobs created in the transition.

Wilkinson said Canada and its industries will be affected by the energy transition, whether Canada is on board with it or not, because it is happening everywhere.

“The global economy, as all of you know very well, is changing and it is changing rapidly,” Wilkinson said. “And it's changing whether we like it or not.

“If we choose to lead, we ensure that our workers and our businesses, take advantage of market opportunities that will be worth trillions of dollars.

“Businesses are, at times, ahead of their governments in understanding this. In this regard, one needs to look no further than the commitment made last year by all of the large oil sands players to achieving net zero by 2050.”

He noted that some of the world’s biggest companies in the world have adopted net zero targets of their own, which suggests those producers that have the lowest carbon profiles will be preferred suppliers.

One area where Canada has taken something of a lead is in the production of low-carbon aluminum, thanks to its hydro power in Quebec and B.C., giving Canadian aluminum a kind of green premium.

“For me, Canada is in a very privileged position,” Ivan Vella, chief executive of aluminum for Rio Tinto, said in a fireside chat with Wilkinson following his keynote address. “To me it’s a very exciting place to be with the position it has with natural resources.

“Hydropower is not something that everyone in the world is endowed with. If we use the hydro power energy across Canada wisely and mix that with other sources of non-emitting energy, Canada's in a wonderful position to both deal with its domestic needs as well as export and other growth options that really help build the economy.”

While Canada -- and B.C. in particular -- has a strong clean-tech sector, there are fears that Canada’s lack of access to venture capital could stymie the investments needed for the energy transition.

Wilkinson acknowledged the problem and said the federal government will need to help make Canada more alluring to venture capital.

“We're looking at some blended finance models, where the government would take some of the risk to enable some of these folks to actually come back into the market in a way that they did in the early 2000s,” he said.