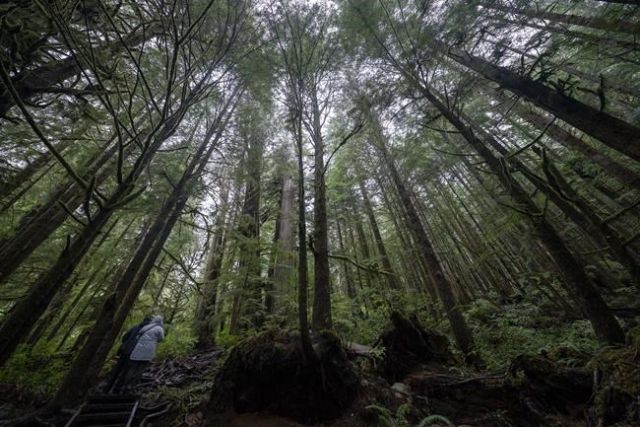 Photo: The Canadian Press
A couple are dwarfed by old growth trees as they walk in Avatar Grove near Port Renfrew, B.C., on Oct. 5, 2021. THE CANADIAN PRESS/Jonathan Hayward

The two-year deferral between the four members of the Nanwakolas Council and the forest company includes preservation of 10 square kilometres of forest identified by an old-growth advisory panel as needing protection.

Another 15 square kilometres of priority ancient forests was also deferred through other agreements between the nations and the forestry firm.

In November, the government said it would defer the logging of B.C.'s most rare old-growth trees and gave 200 First Nations a deadline to say if they supported the deferrals or if they thought further discussion was required.

Nanwakolas Council president Dallas Smith says the agreement is important not only to protect the big trees but the habitat around them because some of the giant ones left standing alone in a clearcut have later blown down.