Coyotes given an edge 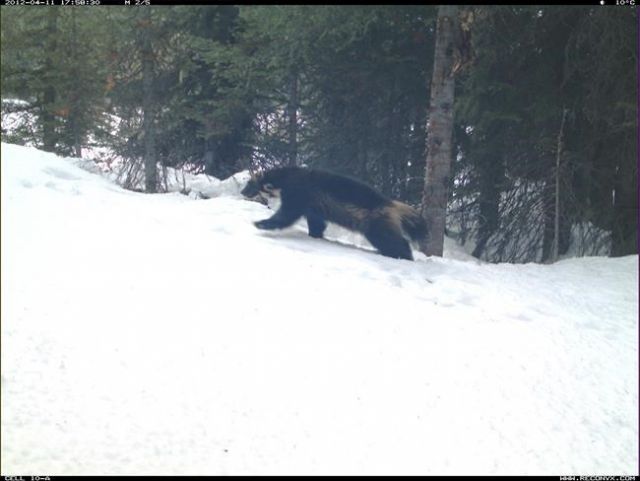 Photo: The Canadian Press
A wolverine is shown in this camera trap photo in Alberta from 2012, in the same location where a coyotes was also photographed a week apart, supplied by lead researcher Gillian Chow-Fraser of the University of Victoria. New research suggests industrial development is helping coyotes move into wolverine country and edge out the rare carnivore despite its fierce reputation. THE CANADIAN PRESS/HO

Industrial development is helping coyotes move into wolverine country and edge out the rare carnivore despite its fierce reputation, newly published research suggests.

"Roads and seismic lines were actually driving competition between wolverines and coyotes," said Gillian Chow-Fraser of the University of Victoria, lead author of the paper published in the journal Biological Conservation.

Chow-Fraser said it's another example of how human activities on a landscape have far-reaching consequences for all the animals living on it.

"We see them changing the animal community in all sorts of ways."

Chow-Fraser, her university colleagues, and the Alberta government examined data from 154 camera traps collected in 2006-08 and 2011-13 from two areas of the province — the relatively untouched Willmore Wilderness Area and Kananaskis Country, which is heavily laced by roads and cutlines from forestry, energy and recreational development.

Altogether, the study analyzes data from 2,790 weeks of camera deployment.

But, as development clears pathways into the boreal forest and foothills of the Rockies, now they do.

"It was increasing the odds they co-occur in an area," Chow-Fraser said.

The data showed that on a road or cutline, the two animals were three times more likely to show up at the same spot within a week of each other than elsewhere.

Wolverines are fierce beasts and Chow-Fraser doesn't suggest coyotes are beating them fang-to-fang. It's more a case of coyotes, with their superior numbers, using up resources wolverines could once count on for themselves and their kits.

"We're talking about a competition for resources or space," she said. "There's a lot of coyotes and they're outcompeting wolverines in these places where there's high density of linear features."

Other predators such as wolves, cougars or bears aren't the problem, Chow-Fraser said. Those animals feed differently and don't compete with wolverines.

Wolverines are considered a "data deficient" animal in Alberta. The province's most recent population estimate — now 20 years old — is fewer than 1,000 animals.

"The Alberta population is considered to be declining at an unknown rate," says Alberta's fact sheet on wolverines.

A 2020 study by the Alberta Conservation Association for the provincial government concludes there are no "robust" population estimates for wolverines across the vast majority of its habitat.

"In 2022, Environment and Parks will be reviewing new information and data available on wolverines to determine if an updated status evaluation should be conducted," said department spokesman Jason Penner.

Federally, wolverines have been listed as a species of special concern since 2014. That status under the Species At Risk Act doesn't compel governments to develop a recovery plan for the animal.

"There really needs to be a reassessment of wolverine numbers in Alberta," Chow-Fraser said. "We definitely need to start taking the status of wolverines more seriously."

The study shows how human intervention on a landscape creates new circumstances that change how species have interacted for millennia. Chow-Fraser compares the wolverine situation to that of caribou, now suffering from wolf predation because roads and cutlines have opened the way into the deep forest.

"We need to think about how industrial development is fundamentally changing the wildlife community."