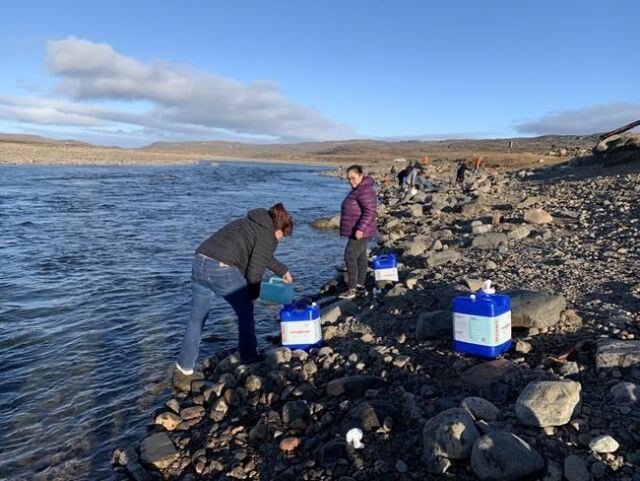 Photo: The Canadian Press
Residents collect water from the Sylvia Grinnell River near Iqaluit, Nunavut on Wednesday, Oct. 13, 2021, after potential petroleum was discovered in the city's tap water, making it undrinkable. THE CANADIAN PRESS/Emma Tranter

The City of Iqaluit shut down its water treatment plant Wednesday after the water was contaminated last week with fuel for the second time.

The city said a breach in the system is suspected to have caused residents to smell fuel in their water, with breaches detected last week and Wednesday.

The city said it is using a bypass system to pump water to residents instead and the entire territorial capital is now under a precautionary boil water advisory.

Nunavut's health department said the level of contamination in the plant was below the limits for fuel set by Health Canada.

"The boil water advisory is a precautionary measure because the water is not filtered through the normal water treatment processes," the department said in a release.

The release said residents should boil their water for one full minute if it is to be used for drinking, preparing infant formula, washing fruits and vegetables, cooking and brushing teeth.

Iqaluit residents couldn't consume their tap water for two months last fall after it was found to be contaminated with fuel.

The city has said an old fuel tank buried next to the water treatment plant was the source of the previous contamination and residual traces of fuel entered the distribution system again last week.

The city said engineers and experts are on-site to find out how fuel entered the water again.

The water is being pumped from Lake Geraldine, Iqaluit's water source, and piped to residents without going through the water treatment plant.

The city said the bypass system chlorinates the water, but residents may notice discoloration, a different taste or smell.

"Residual hydrocarbons from the historic fuel tank discovered, and removed last fall, entered the distribution system, and were noted on the real-time monitoring station at the water treatment plant," the city said.

"Identification of the exact path of the contamination as it entered the distribution system is underway."