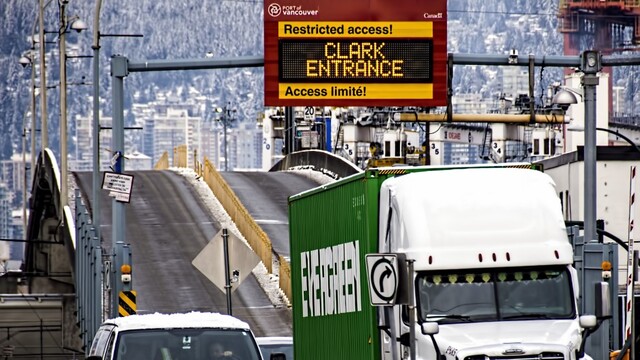 Photo: Chung Chow/Business in Vancouver
The trucking sector appears divided over support for the truck age program, which port officials said will improve air quality in Metro Vancouver while also creating a more reliable and socially responsible truck fleet at the por

A controversial Port of Vancouver program to remove older, more polluting trucks from its drayage operations has been postponed beyond its original Feb. 1 start date, but proponents are confident the delay will be minor.

The Rolling Truck Age Program, a part of the port’s updated licensing system for trucks operating there, originally called for trucks whose model years are 10 years old or older to be phased out starting Feb. 1. The goal was to have only trucks from model year 2012 onward at the port by June 1 (with some exceptions).

About two weeks out from the rollout, however, intense pressure from some truckers, unions and other groups appeared to have forced port officials to issue a letter to stakeholders – announcing that the truck age program’s implementation will be deferred for at least 90 days.

“Over the coming weeks, we will be providing an opportunity for industry and community stakeholders to further share information and feedback regarding specific aspects of implementation of the program,” the Vancouver Fraser Port Authority (VFPA) said in the letter. “We will consider input received as we finalize implementation plans for the Rolling Truck Age Program later this year.”

In the letter, port officials said part of the reason in the deferral is the “recent extreme weather events and the COVID-19 pandemic” that have put additional pressure on truckers’ short-term ability to switch to newer-model trucks to comply with the new rules. Officials also said they took a letter from federal transport minister Omar Alghabra – asking the port to consider a short delay to the program – into consideration in its decision to postpone.

The trucking sector appears divided over support for the truck age program, which port officials said will improve air quality in Metro Vancouver while also creating a more reliable and socially responsible truck fleet at the port.

Dave Earle, president and CEO at the BC Trucking Association, staunchly supports the program to update Port of Vancouver’s truck fleet. Earle added that the postponement of the program’s rollout does not concern him.

“VFPA committed to pause to ensure that they have considered all aspects of the program,” he said. “We fully expect them to move forward with a truck age program once they have duly considered any further input.”

Unifor, the largest private sector union in Canada, was much less supportive. In a statement in response to the original truck age program rollout, Unifor national president Jerry Dias said the initiative – had it gone ahead as planned on Feb. 1 – would have caused “chaos in a system already under unique pressure from the pandemic, flooding and supply-chain issues.”

“Without action from Transport Minister Omar Alghabra, gridlock will overtake Vancouver’s ports,” said Dias in his statement. “Millions of British Columbians rely on the efficient operation of their ports. Ignoring the issue has only made matters worse.”

Back on Jan. 7, Unifor demanded that the port convene consultations with stakeholders about the “fairest way to transition the trucks,” citing the fact that many truckers currently face too much financial hardship to comply with switching to a newer truck. A ban on trucks older than 10 years would have knocked many truckers out of port operations, Unifor added – leading to major disruptions to the port’s trucking capacity.

In its demand, Unifor asked for a two-year pause to the phase-out of older trucks as a starting point – a delay far longer than the 90 days announced by the port. Unifor officials also accused the VFPA of rushing the truck age program’s implementation without proper input from truckers.

Earle said opposition like Unifor’s is not surprising in the truck sector, as he has seen many in the industry push back. However, he also noted that truckers in B.C. could have been ready for the rollout of the program, since the VFPA has bee seeking comment on its plans since 2012.

“This is doable,” he said of the program, noting truckers should still be able to acquire trucks less than 10 years old to comply with the program. “I mean, you don’t have the selection [of newer trucks] you would have had if you did this a year ago, but this isn’t new. The port communicated the timeline last summer. It didn’t surprise anybody.”

Earle also noted that – while opponents often cite the recent floods and highway washouts as a reason why now isn’t a good time for a truck age program – the climate change that’s causing these extreme weather phenomenons should actually be the top reason why the trucking industry should be jumping onboard with a more sustainable truck fleet.

“This is absolutely critical, and it’s something we’ve built into our strategic plan [at the BC Trucking Association],” he said. “... [Climate change] is a real crisis. It’s here, we have to do something about it, and in B.C., the transport industry is number one in terms of GHG emissions.

“To pretend otherwise is ridiculous, and it’s critical that we change,” Earle added.

The difference between making the necessary changes and not, Earle noted, may be the trucking industry’s overall future well-being.

“When we look at the next generation, they are not interested in coming to an industry that pollutes, that isn’t trying to be sustainable and change for the better,” he said. “... When I look at the discussion that is happening, I despair. There’s no discussion that this needs to be done, only about how much money this will cost. There’s nothing else; and that tells me there’s always an opportunity to engage and to educate – but fundamentally, there comes a point where action needs to be taken.”