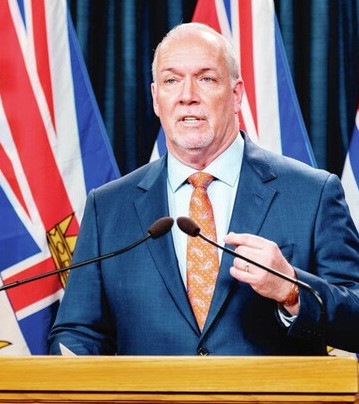 Vancouver police are seeking a suspect after a random attack in Vancouver on New Year's Eve.

Around 3:30 p.m. on Dec. 31, 2021, a 22-year-old woman was walking downtown past the Rosewood Hotel Georgia on West Georgia Street. While walking along the sidewalk a man walking the opposite direction appears to attack her, launching himself at the woman as they pass.

“This video clearly shows the unprovoked and random nature of this disturbing attack,” says Const. Tania Visintin in a press release. “Unfortunately, these types of incidents are happening more often in the city, and it’s led to many people feeling less safe when they’re alone in public.”

The attack happens quickly; in the video the man has essentially passed by the woman when he turns and launches himself at the woman, grabbing her from behind. The two crash into a nearby planter and the woman falls to the ground. Though it's partially obscured in the clip, it appears the man stands over her for a minute before grabbing a bag he dropped and walking off, as another woman approaches.

“The victim was able to free herself from the suspect’s hold. She last saw the suspect walking east on West Georgia Street,” adds Visintin.

The suspect is a white, middle-aged man. In the clip he can be seen wearing grey pants, a black jacket and a black shirt with a large white logo and a black toque with a logo on it. He had headphones in, connected to a what appears to be a phone, and was carrying a large blue bag.