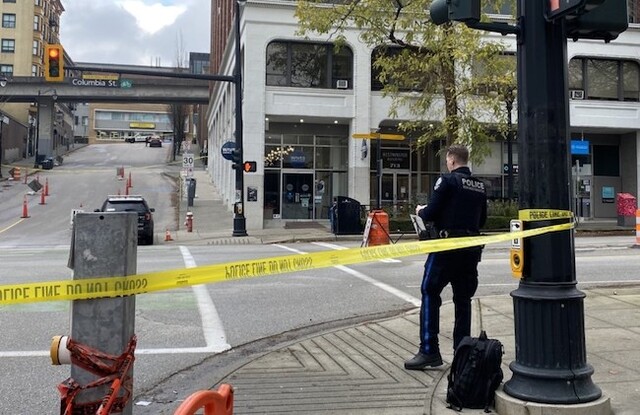 The Downtown New Westminster Business Improvement Association is appealing to police to take action to stop deterioration of the downtown.

At its Jan. 18 meeting, the board received several letters from downtown business owners concerned about safety and livability issues in the area. Karima Jivraj, president of the BIA board, noted a stabbing occurred on Columbia Street the night before the meeting.

“Overnight, there was the fourth major incident on Columbia Street in just under a year. Downtown New West is not feeling safe anymore,” she said. “I had no qualms about walking downtown on Columbia Street before, but now I’m leery. And I am a tough cookie, and a lot of you know that. If I am feeling leery, I’d hate to think of what other people are feeling.”

Jivraj said the BIA members have voiced concerns about a variety of issues, including increased vandalism, shoplifting, harassment, unsafe street behaviours and open drug use.

“Some of these business owners have had to take on additional expenses due to installing extra security, surveillance equipment, doubling up on staff so staff feel safer, and the costs of increased theft and vandalism,” she said. “In addition to the ongoing challenges presented by COVID and construction within the downtown, these concerns are yet another added layer of stress for the businesses and an expense as well.”

Jivraj said she spent $10,000 to install 18 cameras in her 3,500-square-foot store due to the increase in shoplifting and theft.

“I have been here for close to 11 years, and this is the worst I have seen it,” she said.

Jivraj said there was recently a major police takedown in the parking lot outside her store, which rattled customers and staff.

“We have an issue. We need to be heard and things need to change. We can’t work at revitalizing the downtown if it isn’t safe for residents, business owners or visitors,” she said. “I have serious concerns that a once vibrant neighbourhood is deteriorating so fast.”

“We are hearing from staff who work in the downtown that they don’t feel safe locking up at night, walking to their cars or to the SkyTrain by themselves,” she said. “They just don’t feel safe working alone anymore.”

In addition to concerns about what’s happening in the neighbourhood, Jivraj said businesses are frustrated with the lengthy waits they encounter when calling the New Westminster Police Department’s non-emergency line to report issues. She said businesses want open and transparent communication with the police department regarding their concerns.

“I appreciate that it is not a simple solution. You can’t snap your fingers and expect everything to fall into place; it’s not going to happen. I appreciate that,” she said. “But what we are saying is that when we reach out, don’t make us wait for days before we get an answer. Reach out to us. Talk to us.”

Jivraj believes policing needs to change when it comes to dealing with people who are homeless, have addictions or have mental health issues. But she said they still need to address the crimes that are happening.