Infectious up to 10 days 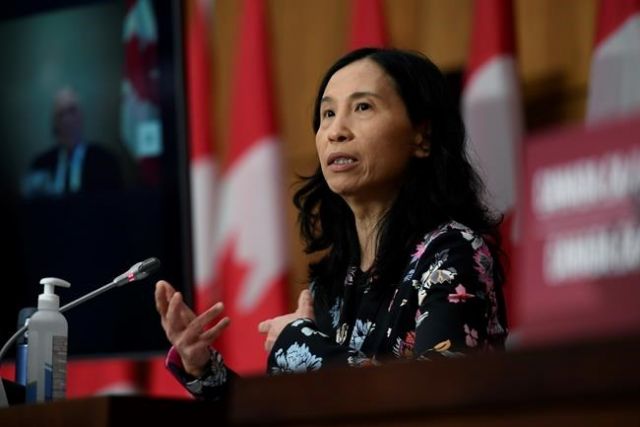 The latest evidence does not show the Omicron variant is contagious for less time than previous versions of the virus that causes COVID-19, chief public health officer Dr. Theresa Tam said Tuesday.

But Tam told the House of Commons health committee that the sheer number infections from Omicron is stressing workforces and is a reason to adjust our risk tolerance for ending isolation periods early.

"This is a difficult decision that the provinces have to make," Tam said.

That was based on data the CDC said suggested Omicron was most infectious for about two days before symptoms started and for three days after.

In Canada, quarantine rules are set by provinces and territories, except as it relates to international travellers. But the Public Health Agency of Canada still recommends people infected with COVID-19 isolate for at least 10 days after they test positive or symptoms begin, whichever came first.

Every province and territory has stopped following that advice, starting with Ontario and Saskatchewan on Dec. 30.

Nova Scotia, Prince Edward Island and Newfoundland and Labrador, as well as Yukon and Nunavut, cut the isolation period from 10 days to seven for vaccinated people. Every other province and the Northwest Territories say five days.

Unlike the CDC however, in Canada the shorter isolation period only applies to fully vaccinated individuals — and in the Northwest Territories to people with a booster shot.

Unvaccinated individuals are still supposed to isolate for 10 days everywhere though exceptions are made in some places for children not yet able to be vaccinated.

Tam was asked by MPs at the health committee Tuesday when Canada would change its guidance and she said the Public Health Agency of Canada is working to update its data on infectious periods.

"There's very little information," she said. "But the studies that we've managed to amass, including a recent one for Japan, suggests that the period of communicability is no shorter than the other variants, because the viral shedding and the viral load doesn't decrease really until day 10 following symptom onset or specimen collection after the diagnosis."

The Japanese study is preliminary and still not peer reviewed but it indicated the viral load was highest among Omicron patients three to six days after symptoms started and disappeared at around 10 days.

That makes it no different from previous variants, Tam said.

"An individual that is infected, for example, is still capable of shedding the virus and communicating this even up to the 10 days," Tam told the MPs.

The Japanese study showed similar results to a data review in the United Kingdom published earlier this month.

However, that doesn't mean the isolation period can't be adjusted with the right precautions, said Tam.

"We do recognize that because so many people are infected with Omicron, at the moment, maintaining business continuity and continuity of critical services is extremely challenging," she said.

Tam said reducing the isolation period carries "a certain amount of risk" and makes other protective layers, like masks, and testing even more important.

The United Kingdom reduced its isolation period from 10 days to seven before Christmas, and further to five days on Monday. But the U.K. says symptoms must be gone and the individual must have two negative rapid tests taken on day five and day six.