Tories urged to reconsider compromise on documents about fired scientists 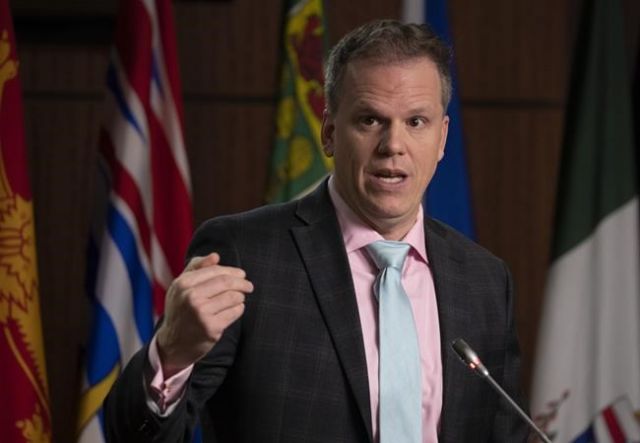 Photo: The Canadian Press
Leader of the Government in the House of Commons Mark Holland speaks during a news conference, Monday, Nov. 22, 2021 in Ottawa. THE CANADIAN PRESS/Adrian Wyld

Government House leader Mark Holland is urging the Conservatives to reconsider their rejection of a compromise proposal that would allow MPs to finally see unredacted documents related to the firing of two scientists at Canada's highest-security laboratory.

In a letter Tuesday to his Conservative counterpart, Gerard Deltell, Holland reiterates his proposal to allow a special all-party, security-cleared committee to review all the documents, aided by three former senior judges who would decide whether or how any disputed material could be released publicly without jeopardizing national security.

He cites articles by several experts who've recently backed the government's contention that Canada's national security would be harmed by complying with opposition demands that the documents be turned over to a regular committee of MPs.

Under a House of Commons order passed by opposition parties last spring over the objections of the Liberal minority government, the documents would be vetted by the parliamentary law clerk for potential national security issues but committee members would retain the right to release whatever material they chose.

In his letter, Holland urges Deltell to read a recent article in the Globe and Mail penned by Michael Kergin, former ambassador to the United States, and two former senior officials in the Privy Council Office, Greg Fyffe and Jim Mitchell.

In it, the trio argued that prolonging the dispute over the documents "could be damaging for Canada's intelligence and security agencies."

They wrote that the release of information that appears innocuous could actually wind up "unmasking" foreign sources and could be "a gift to hostile intelligence powers." It could also deter potential sources from sharing information for fear they could be identified.

Moreover, if the government were to lose control over the release of sensitive information, the trio argued that would violate Canada's obligations to its "Five Eyes" intelligence partners, with whom sensitive information is shared under strict confidentiality conditions.

Canada's intelligence relationship with the U.S. in particular "would also be gravely undermined by any loss of confidence in the government's ability to safeguard its sensitive information," they wrote.

Holland notes in his letter that the three experts backed his compromise proposal, which he calls reasonable and responsible.

"It acknowledges your fair and right request to be able to see all documents unredacted and recognizes the power of the House to order such documents. Our proposal does this without endangering our national security," Holland says.

He cites another recent article penned by national security experts Leah West and Stephanie Carvin at Carleton University and Thomas Juneau at the University of Ottawa, in which the academics argue that all parties need to come together to agree on a process for Parliament to review classified documents.

The Conservatives did not immediately respond to a request for comment on Holland's letter.

While the Tories have flatly rejected Holland's compromise proposal, the Bloc Québécois and NDP have not categorically ruled it out.

"I know they're considering it," Holland said in an interview Tuesday.

Opposition parties believe the documents will shed light on why scientists Xiangguo Qiu and her husband, Keding Cheng, were escorted out of Winnipeg’s National Microbiology Laboratory in July 2019 and subsequently fired last January.

They also want to see documents related to the transfer, overseen by Qiu, of deadly Ebola and Henipah viruses to China's Wuhan Institute of Virology in March 2019.

Just before Christmas, Conservative Leader Erin O'Toole announced that he will not name any Tory MPs to the national security and intelligence committee of parliamentarians, known as NSICOP, until the wraps are taken off the documents.

In his letter, Holland urges Conservatives to reconsider that decision as well, arguing that NSICOP has been "a model of collaboration" where "partisan interests are not placed ahead of national security."

NSICOP was created in 2017 specifically to allow MPs to review sensitive matters. It submits classified reports to the prime minister, which are later tabled in Parliament in edited form. Its members must have top security clearance and are bound to secrecy.

"To not participate in this essential oversight mechanism is to weaken its essential function," Holland writes.

The battle over the documents has dragged on for a year, culminating in June with the head of the Public Health Agency of Canada being hauled before the bar of the House to be reprimanded for his refusal to hand them over.

After that, the government applied to the Federal Court of Canada to prohibit release of the documents on the grounds that disclosure would be "injurious to international relations or national defence or national security." The case was dropped after an election was called in August, which terminated the House order to produce the documents, along with all other business before the Commons.

The Conservatives have vowed to continue pursuing the matter in the new parliamentary session.

Holland said it's "extremely important" to find a resolution that respects the right of parliamentarians to see documents without jeopardizing national security and to have "broad public trust" that there's a fair process for achieving that balance.

"I don't think it's healthy to leave these matters out there," he said in an interview.

"The Conservatives have been in government and might be in government again one day and will have to face these same issues. And so I'm hopeful that they'll take a look at it through the lens of precedent that they would be establishing with the position they're taking and how injurious it could be to national security."