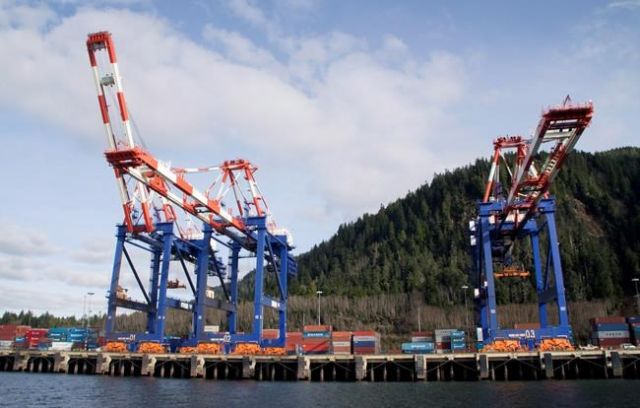 Photo: The Canadian Press
The Fairview Container Terminal, part of the Prince Rupert port system, is seen March 8, 2013. Port officials in Prince Rupert, B.C., say 2021 was a difficult year as cargo volumes fell, but they are optimistic about a strong recovery. THE CANADIAN PRESS/Robin Rowland

Port officials in Prince Rupert, B.C., say 2021 was a difficult year as cargo volumes fell, but they are optimistic about a strong recovery.

Pandemic- and weather-related supply chain disruptions, loss of a core coal customer, decreased shipments due to a poor crop year and a competitive West Coast market are all listed as reasons for the shortfall.

The statement from Shaun Stevenson, president and CEO of the port authority, says despite the upheavals, the port worked to streamline and accelerate the movement of containers while new expedited rail services to Toronto and Chicago will move cargo "at a record pace."

Stevenson says an inaugural shipment of liquefied petroleum gas also left the Watson Island terminal in April as several LPG facilities at the port were either commissioned or opened last year.

Other infrastructure projects in 2021 included the expansion of the Fairview Container Terminal and the addition of an eighth loading crane capable of servicing the largest vessels currently afloat.

Effects of the pandemic, forest fires, floods and supply chain uncertainties all underscored the need for more investment and diversification in the Prince Rupert Gateway to offset future disruptions, Stevenson says in the release.

“By expanding, we hope to continue be a key economic driver in northern B.C. for the benefit of all and will be better positioned to offer Canadian industries supply chain security as the global economy rebounds from the effects of the pandemic,” he said.