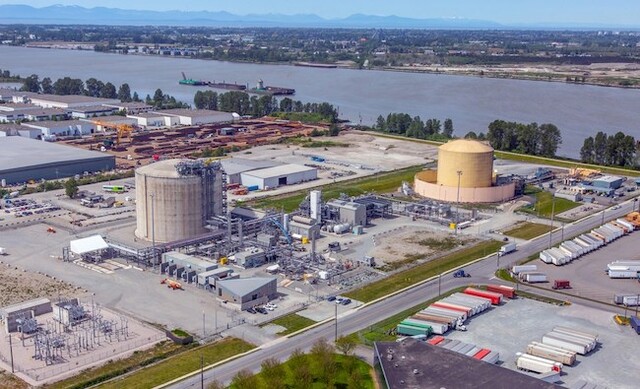 The FortisBC Tilbury natural gas plant has moved ahead another step towards expansion.

Both the federal and provincial governments decided last week to move forward with environmental assessments of the proposed project to build a new storage facility and expand natural gas liquefaction capacity at the Delta plant, located on the Fraser River.

But a group opposing the expansion said the plans are “out of line” with the province’s targets for the oil and gas sector.

“We think the minister of environment should have terminated the proposal because of (climate change) and its poor location for an LNG facility right off the bat,” said Peter McCartney, who belongs to Friends of Tilbury and is also a climate campaigner for the Wilderness Committee.

FortisBC wants to start expanding the storage capacity of the Tilbury facility by 2023 – with a goal of finishing by 2026 – and start expanding its liquefaction capability in 2028.

If liquefaction were expanded, the plant would produce 7,700 tonnes of LNG per day.

FortisBC spokesperson Scott Neufeld said the company assessed other sites, but landed on expanding Tilbury for several reasons: there is already an existing facility – which has run safely for 50 years – there’s room to expand, it’s already zoned industrial and it can provide backup energy for the Lower Mainland.

Richmond city council voted 8-1 to oppose the expansion in 2020 – only Coun. Alexa Loo supported the expansion.

Kelly Greene, currently the NDP MLA for Richmond-Steveston, was on council when the vote was taken. She is currently parliamentary secretary for environment.

Delta city council, on the other hand, hasn’t publicly opposed the project.

Neufeld said part of the environmental process will be to look at Richmond’s concerns and concerns brought up by the public.

While the company currently uses gas that is extracted using fracking, Neufeld said they are moving more towards renewable energy.

But McCartney with the Friends of Tilbury – a group with members in Richmond, Delta and across the Lower Mainland that opposes its expansion – called the renewable energy plans “greenwashing.”

McCartney said he thinks the province is listening to FortisBC’s “pretty slick arguments” that say LNG could be part of B.C.’s climate plan.

“All of the technology we need to replace fracked gas is available now,” McCartney said. “It would be far better to move to electrification.”

“We shouldn’t be adding more infrastructure to lock us into (LNG),” he added.

He pointed out the effects of climate change are being seen in B.C., for example, with the heat last summer and flooding in the fall.

The Friends of Tilbury have been leafleting in Delta to raise awareness about the proposed expansion.

They also plan to do an awareness campaign in Richmond as well.

The environmental assessment process will include another round of public consultation, Neufeld said, which will include open houses, advertised in local media and on social media.