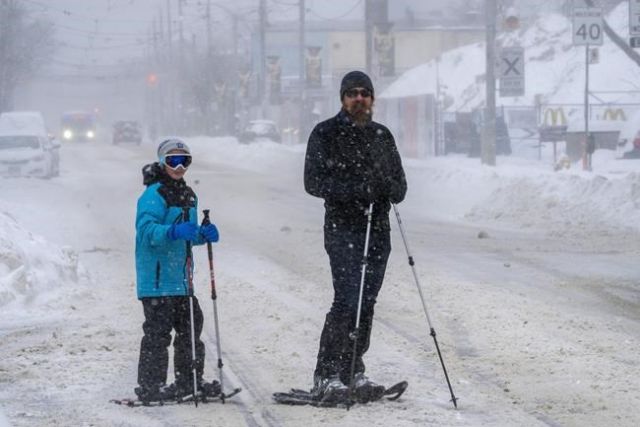 A snowstorm that closed schools in parts of southern Ontario and Quebec on Monday will keep many of them dark for another day, while some parts of the Prairies that were already hit with freezing rain are now contending with plunging temperatures and snow.

But the Toronto District School Board said there would be no live remote or virtual learning, either, noting in an online post that 36 of its schools still need to have snow removed from their roofs — a task it said couldn't be completed Monday due to poor weather and road conditions.

The Ottawa Carleton School Board tweeted early this morning that all schools will be open today. However, the Ottawa Student Transportation Authority has cancelled all bus service because many residential roads have yet to be plowed. Parents are being told they are welcome to drop their children off at school, but must pick them at the regular end of the school day.

The regional GO Transit network warned service would be reduced on Tuesday and to expect delays or cancellations, while several subway lines in Toronto were not running late last night due to what the TTC said were weather-related mechanical issues.

Winter storm and wind warnings were also in place for much of Alberta, parts of southern Manitoba were expected to see heavy snowfall Monday evening, and winter storm, and snowfall and freezing rain warnings were issued in parts of Saskatchewan as well.

Edmonton was already grappling with icy streets and sidewalks Monday, and the city's police said they responded to 190 collisions between 6 a.m. and 6 p.m.

RCMP in northern Alberta recommended late Monday that people to stay off the highways after they said they'd responded to multiple collisions.