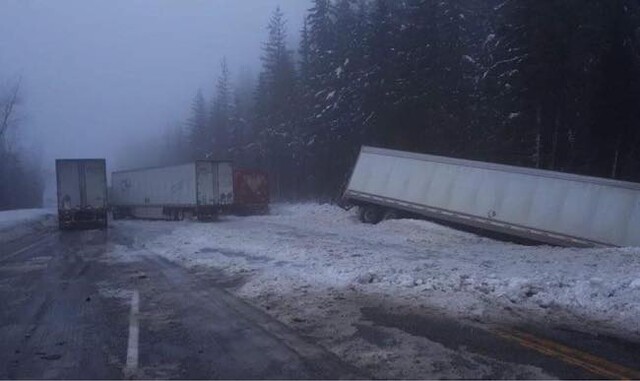 The Trans-Canada Highway may have reopened east of Sicamous and Revelstoke after numerous crashes overnight – but motorists won't get too far if they're heading east.

DriveBC now reports the route is closed for avalanche control work between Field and the B.C.-Alberta border.

The closure is expected to last until 3:45 p.m.

DriveBC reports Highway 1 is now clear east of Sicamous and is open in both directions to Revelstoke.

DriveBC reports the Trans-Canada Highway has reopened to westbound traffic only east of Sicamous.

This follows multiple incidents overnight on the stretch from Sicamous to east of Revelstoke.

The Trans-Canada Highway is expected to reopen before noon following multiple incidents overnight.

DriveBC reports an estimated time of reopening of 10:30 a.m. east of Revelstoke, where multiple semis were reported crashed overnight in icy conditions.

East of Sicamous, the highway is expected to reopen at 11:30 a.m. after traffic was held in the Shuswap community following a crash in Glacier National Park.

Multiple semis are reported jackknifed and crashed on the Trans-Canada Highway east of Revelstoke.

Brian Prochnavy contacted Castanet to share what he described as a "massive pileup of semis" on the highway overnight.

Prochnavy says he could barely stand on the road it was so icy late Monday night.

He says it's lucky no one was killed in the "treacherous" conditions.

The crash scene is about 10 kilometres outside of Revelstoke.

As of 5:45 a.m., DriveBC reported a vehicle incident between Revelstoke and the east boundary of Mount Revelstoke National Park and that the highway is closed.

No detour is available.

DriveBC also reports a crash scene in Glacier National Park and that the highway is closed 26 kilometres east of Sicamous all the way to Golden.

Traffic being held in Sicamous and Golden.

The highway had been closed for several hours for avalanche control work late Monday. 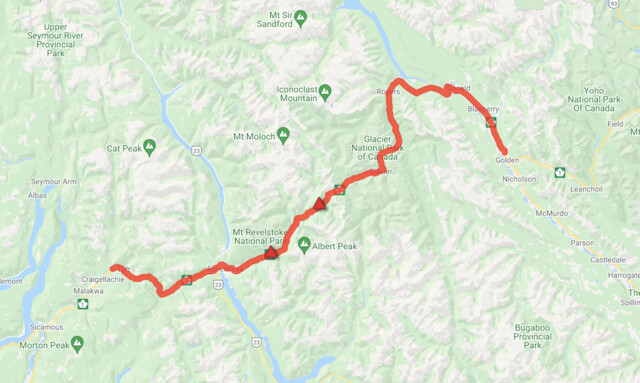