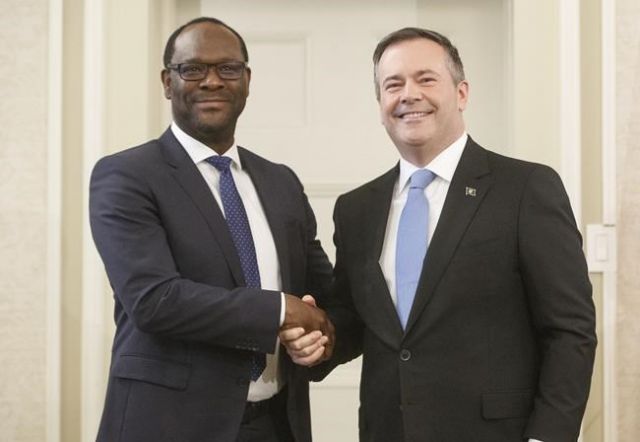 Photo: The Canadian Press
Alberta premier Jason Kenney shakes hands with Kaycee Madu, Minister of Municipal Affairs, after being sworn into office in Edmonton on Tuesday April 30, 2019. Madu, who is currently the province's justice minister, is being called on to resign for phoning Edmonton’s police chief with concerns about a traffic ticket. THE CANADIAN PRESS/Jason Franson

Alberta’s Opposition is calling for the justice minister to resign because he phoned Edmonton’s police chief with concerns about a traffic ticket.

The service says in a statement that Madu had concerns about the traffic stop but did not ask the chief to waive the ticket.

Police say the ticket was issued correctly and remains valid.

NDP justice critic Irfan Sabir says, regardless of intent, it's an abuse of power for any cabinet minister — let alone the justice minister — to interfere in the judicial process regarding a personal matter.

Madu and a spokesman for Premier Jason Kenney did not immediately respond to requests for comment.

The issue came to light in a story published Monday by CBC Edmonton.

CBC said Madu was ticketed for distracted driving while using a cellphone in a school zone.

CBC reported that McFee said in an interview Madu, who is Black, called soon after to express concern about people of colour being stopped by officers. It said he later paid the $300 ticket.

Madu represents the constituency of Edmonton-South West for the United Conservative government and has been justice minister since August 2020.

McFee, through the police media relations office, declined an interview. But the service issued a short statement.

“Chief McFee did receive a phone call from Minister Madu in relation to a distracted driving ticket he was issued on March 10, 2021,” it said.

“Minister Madu had concerns about the context of the traffic stop. To be clear, he did not ask the chief to rescind the ticket. The ticket remains valid and was issued correctly.”

Sabir, in a statement, said parliamentary precedent demands Madu step down from his cabinet post.

“Regular Alberta drivers do not have the ability to call their local police chief and discuss traffic tickets,” said Sabir.

“Madu used his position as minister to initiate this conversation, and regardless of whether he asked the chief to cancel the ticket, it is political interference for him to have discussed it all.

"It is inappropriate for any cabinet minister to interfere in the administration of justice, even more so when it's directly related to their own personal self-interest, and it’s utterly unacceptable when that interference is committed but the attorney general."