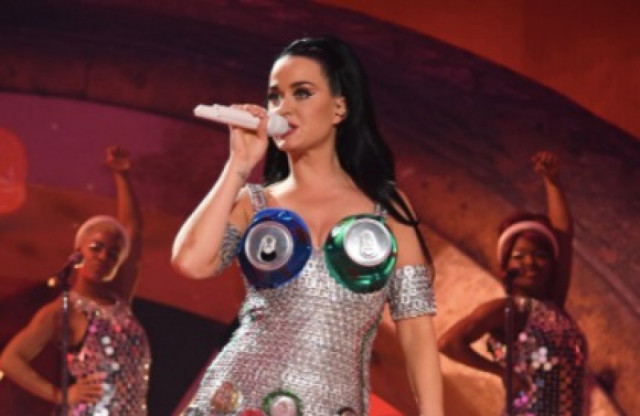 The ‘Firework’ hitmaker is thankful that the 45-year-old actor has fantastic oral hygiene and his "brilliant" pearly whites but had less kind words for his casual attitude to cleaning up after himself in the bathroom during a recent appearance on UK radio station Heart on Monday.

After being asked what bad habits her fiancé has, the 37-year-old pop star told hosts Amanda Holden and Jamie Theakston: “Oh my God, he loves to floss, which thank God because some partners don’t and it’s disgusting and he has brilliant teeth.

“But he leaves the floss, everywhere! On the side of my bed, and in the car, and on the kitchen table, I’m like, ‘There are bins everywhere.'”

The ‘American Idol’ judge also gave some insight into her family’s delayed but "amazing" Christmas celebrations - which took place on 2 January - and how it was the “favourite” Christmas she had ever had in her life, partly because of her daughter reaching an age where she understood what was happening.

Katy - who shares 16-month-old daughter Daisy with the 'Pirates of the Caribbean' star - said: “I celebrated Christmas with my family, which was amazing.

“It was my favourite Christmas actually because my daughter’s now 16 months, and she’s aware of presents and we wore Christmas jammies but we celebrated on January 2, so everybody was done with Christmas, and it was like, everybody wakes up, because COVID has been crazy.”

The ‘When I'm Gone’ singer - who began her Las Vegas residency ‘Play’ on December 29 at Resorts World Las Vegas - explained how she keeps her show on the road despite the uncertainty due to the COVID-19 pandemic, such as creating bubbles.

She said: “And I’ve been in a bubble, trying to save the show, so that the show goes on, even if the show is on the Titanic.”