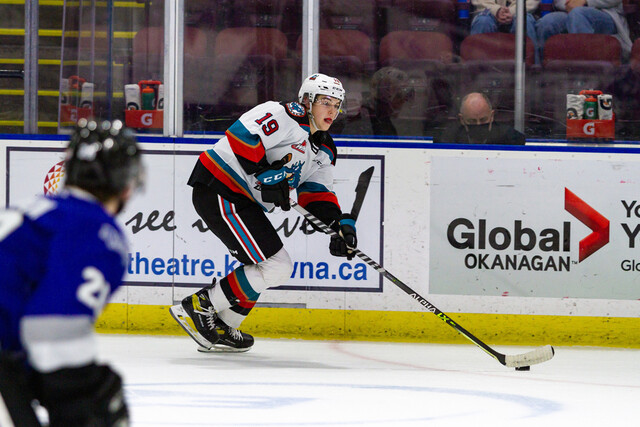 Photo: Steve Dunsmoor
Adam Kydd has made a positive impression since he was acquired in a deal with Calgary 12 days ago.

The Kelowna Rockets president and general manager expects to go into the second half of the season with the roster as it's currently constructed.

Ideally, Hamilton says he wouldn't mind adding another older forward, but says he's not prepared to pay the price teams are asking for those types of players.

"We made the deal to get Kydd here, which gives us a little more experience and a guy who really didn't want to be here moving along," said Hamilton.

"We made a lot of moves to get our goaltending to where it is. Our coach likes this team a lot, and I think they're coming, so unless something falls in our lap between now and Monday afternoon, probably not a lot."

Hamilton says he's not interested in moving any more draft picks after dealing several of those selections while constructing the team that was to have hosted the ill-fated 2020 Memorial Cup.

The team has already dealt its first four picks in the 2022 draft and first, third, fourth and sixth round picks in 2023.

He says he's happy the way the goaltending has shaken out. Talyn Boyko has taken the crease and run with it, and newly signed Lloydminster, AB native Jari Kykkanen is waiting in the wings.

"We're really excited to about seeing Kykkanen getting some games shortly.

"If we have decent goaltending, we should be able to compete every night. Early on we weren't able to do that."

Hamilton says the key through the second half of the season is staying healthy, which means avoiding a major outbreak of the coronavirus.

The Rockets are one of the only teams that has not been forced to pause due to the virus.

The team is also rolling the dice with just seven defencemen on the roster moving forward. They were forced to dress just five for games against Victoria on the weekend.

The Rockets, just five points out of top spot in the BC Division, will hit the midway point of the season next Saturday in Vancouver.