In the wake of what he calls an unprecedented amount of snow, Tom Cloutier, operations manager for Miller Capilano, which holds the Ministry of Transportation and Infrastructure (MOTI) contract for highway maintenance in the Pemberton area, wants to give a shout-out to his crew who have been working long hours to keep up with the snow-clearing efforts in Pemberton.

“It’s been a lot of work. I haven’t seen anything like this since probably 1998 or maybe even earlier throughout the area,” Cloutier said. “So it’s been a struggle for sure with that much snow and no relief in between storms, like back-to-back storms. Our crews have been super busy, working long hours, working Christmas and New Year’s and Boxing Day, so we’ve got to give a big shout-out to those guys for making the effort to come in to work on those days.”

But despite the long days worked by the Miller Capilano crew, with multiple heavy snowfalls in a short period of time at the beginning of January, it has been a struggle to keep up with clearing all the roads in a timely manner, Cloutier said, which can then lead to more issues down the line as snow continues to accumulate.

“Typically, if we can clear the shoulders then the guys have more snow storage. But because we haven’t had a chance to do that, the snowbanks are becoming higher, and the road becomes narrower because we can’t throw it over the top of the snowbank,” he said.

And with Miller Capilano’s priorities being Highway 99, Portage Road, and Pemberton Meadows Road, another issue caused by the near-constant snowfall the Pemberton Valley has seen is some seemingly longer-than-usual waits for certain side roads to get cleared, which in turn has led to some residents having to take matters into their own hands.

But after spending countless hours over many years clearing the road to his farm and all the neighbouring driveways himself, local farmer Jason Hickinbottom is just about fed up with how long it takes the highways crew to clear Erickson Road despite it branching off the high-priority Pemberton Meadows Road.

“I normally don’t like dealing with any of this kind of stuff, but I’m so sick of it. Like, where the hell are all these guys? You see them sitting around half the time on the side of the road, what are they doing?” said Hickinbottom. “What concerns me the most is someone’s house is going to burn down because fire trucks can’t get in, or someone’s going to die because the ambulance can’t get in.”

He knows the crews have their hands full, but given that Erickson Road is quite short, it wouldn’t take much to clear it, Hickinbottom said.

“They go by and plow the main roads, and ours is only a kilometre long,” he said. “So if they actually turn down and kept the speed up, they can blow it open quite easy.”

While Cloutier appreciates the extra help and calls what Hickinbottom and others in the area do to help clear certain roads a “welcomed relief,” he said the crew at Millar Capilano has been adhering to the response times outlined in their contract.

“There are some response times that we have to adhere to within the contract and a lot of times they’re not what people think they should be,” said Cloutier. “There’s also snowfall accumulation [guidelines saying] we don’t even have to go to the road if it’s not 15 or 20 centimetres of accumulation. So sometimes they think it should be serviced better than it really needs to be in accordance with our contract.”

According to Hickinbottom, this year has been the last straw. And while he will probably continue to clear his neighbours’ driveways and make sure they can get to Pemberton Meadows Road without any issues, he has also been keeping a tally of the hours he’s spent clearing the road for the highways crew and plans to send Miller Capilano a bill for his efforts.

Meanwhile, due to staff shortages and equipment failures, the Village of Pemberton (VOP) has also been struggling to keep up with its snow-plowing duties.

According to VOP operations and projects manager Tom Csima, not only has the amount of snowfall had the town’s snow removal crews playing catch-up and working overtime to clear the roads in a timely manner, but with the recent warm weather and rainfall of the last few days, flooding concerns have now taken over top priority. 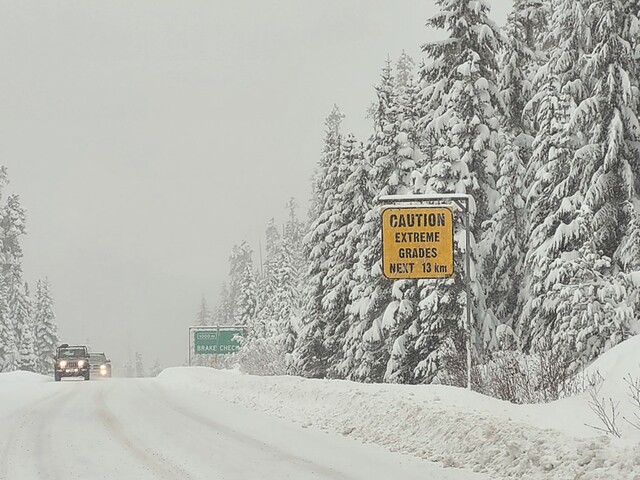 Photo: Contributed
Crews in Pemberton have been working long hours to keep the roads clear after multiple major snow events this winter.

“We’ve kind of put a halt to cleaning up because we’re expecting a lot of rain,” Csima said.

“And so one area of focus is making sure that all the drainage and storm systems like stormwater catch basins are clear so that the rain has somewhere to go, because that’s a problem in the winter when you get the rain-on-snow events.”

Heavy rain melts the snow, which adds to the volume in drainage and storm systems, leading to the potential for backed-up drains and flooding, Csima said.

“So this week, that’s what we’re really focusing on,” he said.

“Unfortunately, as a result, that means that we’re not tidying up some of the streets as best as we normally would. But I think everyone knows that risk because it happens here fairly regularly, so that’s our big focus right now.”