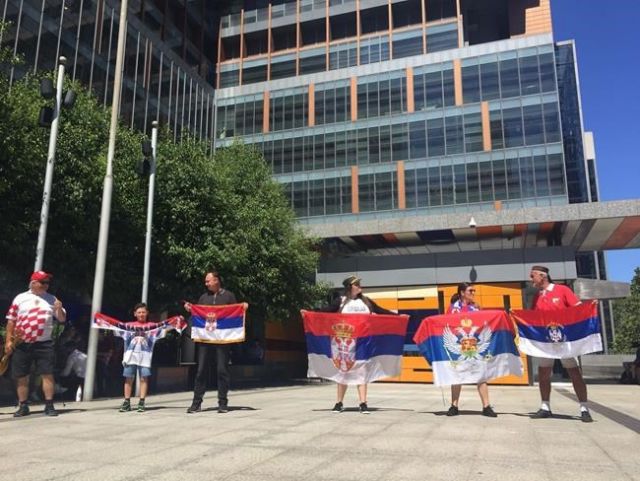 Photo: The Canadian Press
Supporters of Serbian tennis player Novak Djokovic hold their flags outside the Federal Court building in Melbourne, Sunday, Jan. 16, 2022. Djokovic returned to court on Sunday to fight an attempt to deport him because of what a government minister described as a perception that the top-ranked tennis player was a “talisman of a community of anti-vaccination sentiment.”(AP Photo/Tom Moldoveanu)

Novak Djokovic left Australia on Sunday evening after losing his final bid to avoid deportation and play in the Australian Open despite being unvaccinated for COVID-19. A court earlier unanimously dismissed the No. 1-ranked tennis player’s challenge to cancel his visa.

Djokovic, a 34-year-old from Serbia, said he was “extremely disappointed” by the ruling but respected it.

A masked Djokovic was photographed in an Melbourne airport lounge with two government officials in black uniforms. He left on an Emirates flight to Dubai, the same United Arab Emirates city he flew to Australia from.

He has won a record nine Australian Open titles, including three in a row, but this time won’t even get the chance to try.

“I respect the Court’s ruling and I will cooperate with the relevant authorities in relation to my departure from the country,” he said in a statement.

Djokovic said he was “uncomfortable” that the focus had been on him since his visa was first canceled on arrival at Mebourne's airport on Jan. 6.

“I hope that we can all now focus on the game and tournament I love,” he said.

The national federation that runs the tournament, Tennis Australia, said it respects the decision of the Federal Court. “We look forward to a competitive and exciting Australian Open 2022 and wish all players the best of luck,” it said in a statement.

A deportation order also usually includes a three-year ban on returning to Australia.

In Serbia, President Aleksandar Vucic said the hearing was “a farce with a lot of lies.”

“They think that they humiliated Djokovic with this 10-day harassment, and they actually humiliated themselves. If you said that the one who was not vaccinated has no right to enter, Novak would not come or would be vaccinated," Vucic told reporters.

He said he told Djokovic after talking to him "that we can’t wait to see him in Serbia, to return to his country, to come where he is always welcome.”

He did not say whether Djokovic said he would first go to Serbia after his deportation.

Chief Justice James Allsop said the ruling came down to whether the minister's decision was "irrational or legally unreasonable.”

Hawke welcomed the decision. His office did not immediately provide detail of how or when Djokovic would leave.

“Australia’s strong border protection policies have kept us safe during the pandemic, resulting in one of the lowest death rates, strongest economic recoveries, and highest vaccination rates in the world,” Hawke said.

“Strong border protection policies are also fundamental to safe-guarding Australia’s social cohesion which continues to strengthen despite the pandemic,” he added.

Prime Minister Scott Morrison welcomed what he described as the “decision to keep our borders strong and keep Australians safe.”

But opposition spokesperson on the home affairs portfolio, Kristina Keneally, said Djokovic was being deported for what he said and did publicly overseas before the government gave him a visa in November.

“This mess isn’t a failure of our laws. It’s a failure of Morrison’s competence & leadership,” Keneally tweeted.

Infection rates have soared across much of Australian since December when Morrison's government relaxed what had been some of the democratic world's toughest restrictions on international travel.

Djokovic’s visa was initially canceled on Jan. 6 by a border official who decided he didn't qualify for a medical exemption from Australia’s rules for unvaccinated visitors. He was exempted from the tournament's vaccine rules because he had been infected with the virus within the previous six months.

Canadian Vasek Pospisil, who has worked with Djokovic to form an association to represent players, tweeted: “There was a political agenda at play here with the (Australian) elections coming up which couldn’t be more obvious. This is not his fault. He did not force his way into the country and did not ‘make his own rules’; he was ready to stay home.”

Pospisil wrote that Djokovic wouldn’t have tried to go to Australia at all and “been home with his family” had he not received the medical exemption.

Djokovic has won nine Australian Open titles, including three in a row, and a total of 20 Grand Slam singles trophies, tied with rivals Roger Federer and Rafael Nadal for the most in the history of men’s tennis.