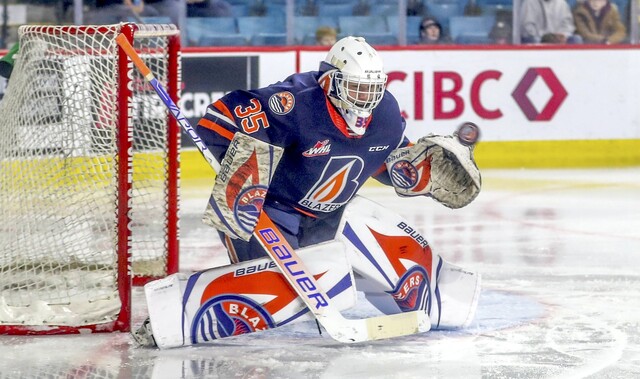 Photo: Allen Douglas/Kamloops Blazers
Dylan Ernst, shown here in action in December, made 25 saves in Spokane on Saturday to earn his second shutout of the season.

Daylan Kuefler scored two goals and Logan Stankoven managed three points as the Kamloops Blazers skated to a 6-0 win Saturday over the Chiefs in Spokane.

Dylan Ernst was perfect on 25 Spokane shots to earn his second shutout of the season.

After a scoreless first period, the Blazers exploded for three goals in less than three minutes midway through the second. Goal scorers were Kuefler (2), Nick McCarry, Dylan Sydor, Caedan Bankier and Logan Stankoven.

The Blue and Orange will head south to Portland to take on the Winterhawks on Sunday, a make-up game that was postponed on Wednesday while the Blazers’ team activities were paused due to COVID-19.