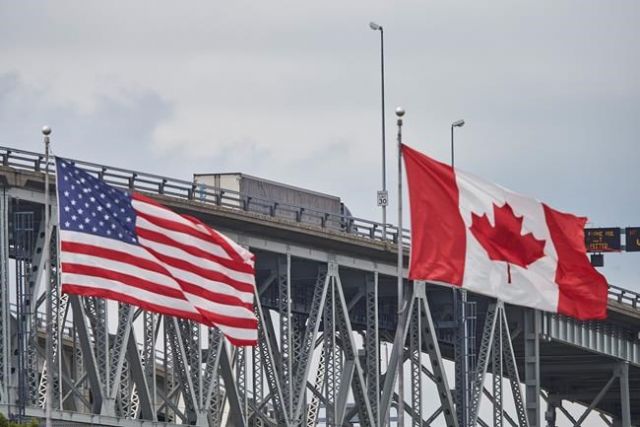 A COVID-19 vaccine mandate for truckers crossing into Canada from the United States came into effect on Saturday, causing "limited delays" at some border crossings and raising worries about future disruptions to the supply chain as the pandemic drags on.

As of Saturday, Canadian truckers must be fully vaccinated if they want to avoid quarantine and a pre-arrival molecular test, while unvaccinated American big-riggers are to be turned back at the border.

Trucking industry groups accused the Canadian government of sparking confusion after the Canada Border Services Agency suggested earlier this week that Ottawa was backtracking on the rules, only to have that information refuted the next day.

The president of the Canadian Trucking Alliance said Saturday the application of the mandate could potentially cause some slowdowns at the border in the coming days if unvaccinated truckers have to turn their big rigs around.

But Stephen Lakowski said the bigger concern centres on wider effects on the supply chain caused by driver shortages, which are likely to be felt cumulatively in the coming weeks and months.

Mike Millian, the president of the Private Motor Truck Council of Canada, said in an interview that as of midday Saturday the borders appeared to be flowing smoothly.

But he said some Canadian truckers who were dispatched during the 16-hour window in which Ottawa's erroneous announcement spread through the sector will have to face consequences upon their return.

"There's going to be drivers returning in the next two, three, four days who were expecting not to quarantine who will have to quarantine," he said in a phone interview.

A spokeswoman for the Canada Border Services Agency said in an email that traveller processing times in the commercial stream had increased at some ports of entry, resulting in "some limited delays" in the hours following the new rules.

Rebecca Purdy added that there is normally a transition period when new measures are introduced, and said the CBSA would adjust its resources and staffing levels in the coming days if needed.

Up to 26,000 of 160,000 truckers who make regular cross-border trips will be sidelined, adding further bottlenecks and potential price hikes to the flow of goods into the country, according to the Canadian Trucking Alliance. Lakowski said Canadian trucking companies have been working to adjust to the mandate by reassigning unvaccinated truckers to domestic duties.

Public health experts have suggested in recent days that Canada could be nearing the peak of infections from the pandemic's current, Omicron-driven wave. But hospitalizations and deaths, which tend to lag behind, showed no sign of easing on Saturday.

Ontario reported nearly 4,000 patients in hospital, while Quebec logged nearly 3,200 as well as 96 deaths -- a number that hasn't been seen since the first wave in 2020.

The number of people in Saskatchewan hospitals with COVID-19 climbed to 150 on Saturday, according to the government's COVID-19 dashboard, up 19 from a day earlier.

Federal Emergency Preparedness Minister Bill Blair announced late Friday that Canadian Forces Rangers were being deployed to the remote northern First Nation of Attawapiskat, which has been struggling with a growing outbreak.

The Weeneebayko Area Health Authority, which serves the James Bay region of Ontario, reported nine new cases in Attawapiskat on Friday, bringing the total number of infected in the community to 40.

New lockdown measures came into effect in New Brunswick, as the province reported one additional COVID-19 death and 113 hospitalizations due to the virus.

The new Level 3 lockdown restrictions include the closure of gyms, entertainment venues and indoor dining at restaurants, while retail businesses can stay open at 50 per cent capacity and with physical distancing measures in place. The new rules took effect at 11:59 p.m. on Friday and are expected to remain in place until the end of the day on Jan. 30.

Nova Scotia, which reported 58 people in hospital, said it would cease following up with most people who test positive for COVID-19 beyond an initial notification confirming the result.

Public health officials in Newfoundland and Labrador added one new virus-related death and 314 new COVID-19 diagnoses to their provincial counts, though hospitalizations rose by only one and now stand at nine.

In Prince Edward Island, where the pandemic only made limited inroads in previous waves, officials recorded 309 new cases of COVID-19 on Saturday. The province's seven-day average of new cases stands at 226.

Nunavut, meanwhile, reported five new cases in the territory on Saturday, plus one presumptive case in the village of Naujaat.