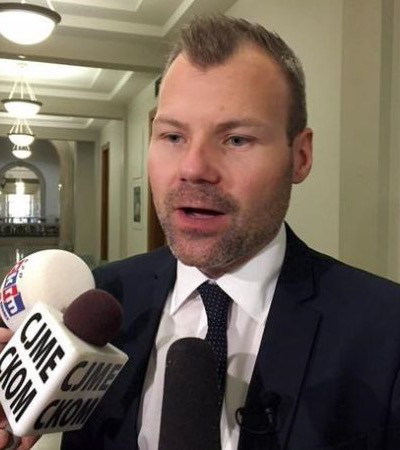 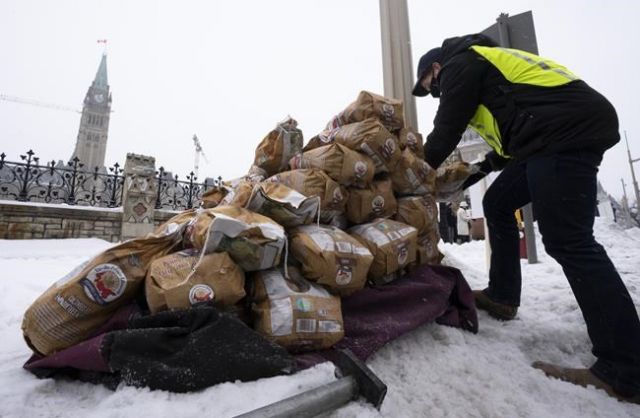 Photo: The Canadian Press
Bags of Prince Edward Island potatoes are unloaded from a transport truck, Wednesday, Dec. 8, 2021 in Ottawa. The Canadian Food Inspection Agency imposed the export ban two weeks ago to satisfy concerns raised by the US over the discovery of potato wart in two PEI fields. THE CANADIAN PRESS/Adrian Wyld

Representatives from Prince Edward Island farms handed out potatoes to the public Wednesday in front of Parliament Hill, to show gratitude to their supporters and raise awareness of the effects of the export ban on Island spuds to the United States.

The group hauled 10-pound bags of spuds out of a truck that carried 6,000 bags from the Island to Ottawa, in an event organized by the P.E.I. Potato Board.

Two weeks ago, the Canadian Food Inspection Agency announced it would suspend shipment of fresh potatoes from the Island to the U.S. after the recent discovery of a fungus, called potato wart, growing on two potato farms.

This fungal parasite spreads by movement of infected potatoes, soil and farm equipment. While it poses no threat to human health, it can significantly decrease potato crop yields and leave potatoes disfigured.

John Visser, chair of the P.E.I. Potato Board and a potato farmer, said he hopes decision-makers will take notice of this effort and resolve the trade issue quickly.

"We do have tremendous support from our provincial government. They have our backs. It would be great if the federal government would take the same approach, and work on that also," he said.

P.E.I. Premier Dennis King attended the event, and said the gesture was a demonstration of the importance of the industry to the Island.

"When the potato industry hurts, everybody hurts," said King.

Federal Agriculture Minister Marie-Claude Bibeau, who also visited the event, said she and International Trade Minister Mary Ng are looking at "every option on the table."

Bibeau said the government will pursue a discussion with the U.S. that is science-based.

"Our objective is to reassure them as quickly as possible because our fresh potatoes are definitely safe for everyone," she said.

King said he met with Bibeau, Ng and P.E.I. MP Lawrence MacAulay that morning to discuss a possible way forward with the U.S. that is rooted in science.

Referring to the potato wart, King said, "We've been living with this pest for 21 years, everything we do is the gold standard in terms of our management plan."

Visser said as a result of the ban, his farm has gone from grading 15 to 18 truckloads of potatoes normally, to one load last week and none this week. Most of his staff is laid off, he said.

"It's hard on the finances, and it's hard emotionally and mentally on all people that are involved," he said.

Conservatives pressed Prime Minister Justin Trudeau on the issue during question period in the House of Commons. Trudeau said that Canada had to take action; otherwise, a response to the situation would have been decided by the United States.

"We needed to act," said Trudeau.

He said the government is working with the U.S. to move forward in a way that is safe and supports the Island.

NDP Leader Jagmeet Singh said in a statement that farmers "shouldn't have to pay for the (Liberal government's) inability to negotiate with the United States," and that the government should put all resources needed to support the Island and put pressure on the U.S. to fix the trade conflict.

The U.S. market is worth about $120 million annually to the Island's potato industry.