Vancouver Giants slipped into 2nd spot in the BC Division, upending Kelowna 5-3 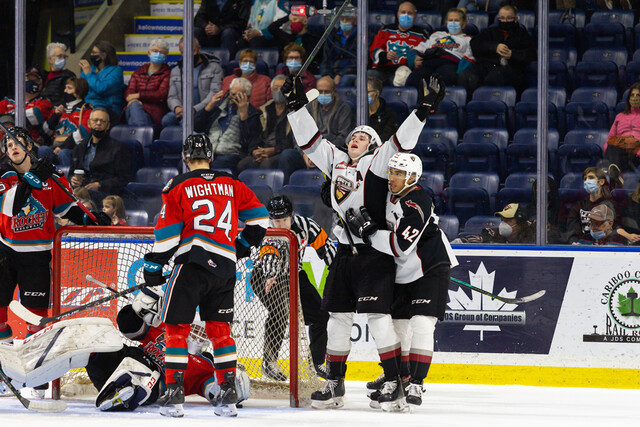 Zach Ostapchuk scored twice in the third period, leading the Vancouver Giants past the Kelowna Rockets 5-3.

Vancouver leapfrogged the Rockets into second spot with the victory.

With the score tied 3-3 nearing the midway point of the third, Fabian Lysell's initial shot hit Talyn Boyko, then the post before Ostapchuk tapped home what proved to be the game winner on a Vancouver power play.

Ostapchuk sealed it with less than four minutes left in regulation.

Fabian Lysell, a first round draft pick of the Boston Bruins was the difference, scoring twice and adding a pair of assists on Ostapchuk's pair.

Lysell gave the Giants a 2-0 first period lead, banging home a rebound on a Vancouver power play, then batting a puck out of mid air after it ricocheted right to him off the end boards.

Mark Liwiski with a beautiful individual effort got the Rockets on the board early in the second. He picked up the puck inside his own blue line, sped down the right wing, and beat Jesper Vikman with a backhand high to the short side.

Colton Dach tied it on a Kelowna power play. His initial shot was blocked, but he wired home his ninth on the rebound.

After the Giants regained the lead, Pavel Novak struck with his 10th, a shot that appeared to go in off a Vancouver stick.

Liwiski was easily the best Rocket on the ice, playing arguably his best game of the season against a team he always seems to get up for.

"I thought our whole line played well - we all stuck together," said Liwiski.

"I think more just getting physically engaged in the game. When you are sitting there on the bench waiting to go...just get energy on the bench, and credit to the coaching staff for that and the players."

Assistant coach Josh McNevin, who has run the bench the past four games with head coach Kris Mallette at the Capital City Challenge in Ottawa the past week, credited his team with hanging in against a talented Vancouver squad.

"I thought we played a really good game. We worked hard, we got chances. I wish we would have capitalized on our chances a little more, but it was a good hard game," he said.

The Rockets outshot Vancouver 41-24 on the night, but managed just three past Vikman, who made some key saves when he had to.

The Giants went 2-2 on the power play while the Rockets were 1-4.

Three member of the Rockets will head home Thursday with medals from the Capital City Challenge.

They'll return in time to embark on a three game road swing beginning Saturday in Kamloops.

Despite receiving word Tuesday the province had lifted capacity restrictions, Wednesday's crowd of 3,650 was only slightly better than the 3,400 previously allowed.