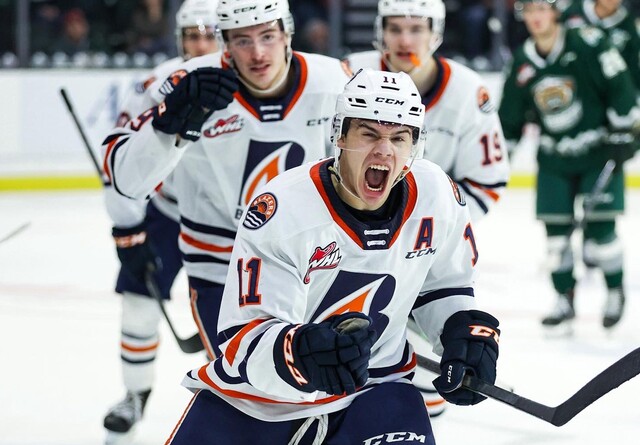 Photo: Kristen Ostrowski/Everett Silvertips
Logan Stankoven celebrates a power-play goal in the first period on Saturday in Everett. The Blazers handed the Silvertips their first regulation loss of the season.

Dylan Garand made 41 saves in Everett on Saturday as the Kamloops Blazers won a battle of WHL juggernauts.

Kamloops sits comfortably atop the WHL’s B.C. Division standings, seven wins up on the second-place Kelowna Rockets (10-5-0-2). The Silvertips enjoy a similar lead in the U.S. Division, but are now second to the Blazers in the WHL's Western Conference standings.

The Blazers are slated to be back in action on Friday in Langley against the Vancouver Giants (10-7-1-0). Their next home game is scheduled for Dec. 4, when the Rockets are expected to visit Sandman Centre.