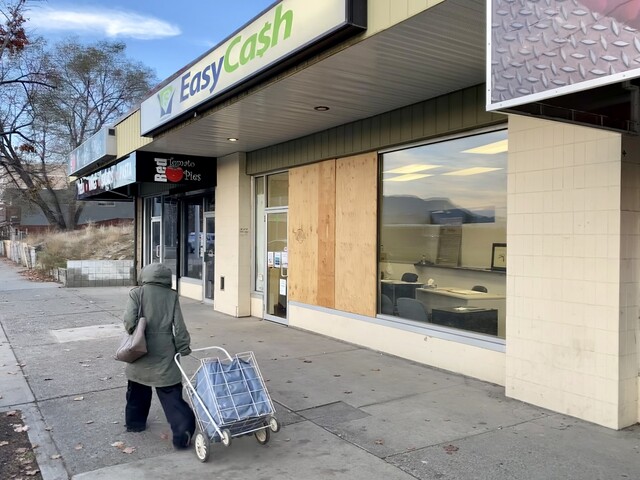 Photo: Tim Petruk
Ezra Wellness, which was opened last week by an unvaccinated Kamloops nurse, was forced to remove its signage on Monday. The clinic is located inside the former Easy Cash storefront on Tranquille Road.

The owner of the commercial space in which an unvaccinated nurse opened a wellness clinic last week is shutting down the operation.

Ezra Wellness opened its doors on Oct. 26. On Monday, its signage had been removed and Glenn Aalderink, the nurse who started it, said it had to do with a dispute with the building owner.

Brendan Shaw, a city realtor who owns the building at 552 Tranquille Rd., said the space was sub-leased by another tenant without permission.

“We were not consulted in advance by our tenant regarding the use of this space, so I immediately had a conversation with our tenant because we have a no sub-lease clause in place and this is not an allowable option,” Shaw said in a statement.

“With each of our commercial tenants, we have a process we follow to vet and approve all tenants.”

Shaw said part of that is making sure tenants are able to meet legal, financial and insurance requirements.

“Without having gone through this process and because we have a no sub-lease clause in place, we cannot reasonably give approval on a lease,” he said.

Aalderink said the space he had been operating out of was donated by The Printing Place, which is one of Shaw’s tenants at 552 Tranquille Rd.

A user-pay clinic that was opened in a North Shore commercial building last week by an unvaccinated nurse is in hot water, its signage taken down as part of a spat with the owner of the building.

“There was a little bump in the road that we’re just trying to iron out,” Ezra Wellness operator Glenn Aalderink told Castanet Kamloops.

Aalderink, who organized a well-attended anti-vax rally on Columbia Street on Sept. 1, opened the doors to Ezra Wellness on Oct. 26.

The office is set up in a small storefront in the 500-block of Tranquille Road. According to Aalderink, the space was donated by The Printing Place, which is located in rented space next door.

Aalderink was diplomatic when asked about the issue on Monday. He confirmed his signage has been taken down due to a dispute with the owner of the building.

“At this point, I don’t want to cause any friction with anyone,” he said.

Aalderink said he’s been given a timeline for when the owner of the building “wants us out of here,” but wouldn't say more than that. Attempts by Castanet Kamloops to contact the landlord were unsuccessful.

“I’m trying to be sensitive and not burn all my bridges,” Aalderink said.

Speaking last week to Castanet Kamloops, Aalderink described Ezra Wellness as an alternative to traditional healthcare for those with medical issues, but he stopped short of calling it a medical clinic or claiming to provide medical care.

He later said that he hopes to treat people with cuts and fevers.

Aalderink said Ezra Wellness storefronts would soon open in Kelowna and Salmon Arm, as well as elsewhere in B.C., Alberta, Ontario and Australia.

Interior Health confirmed last week it is aware of Ezra Wellness, but a spokesperson said IH “does not oversee private clinics providing medical services." The health authority said anyone working in healthcare has to follow provincial rules — and anyone caught breaking them could be penalized.