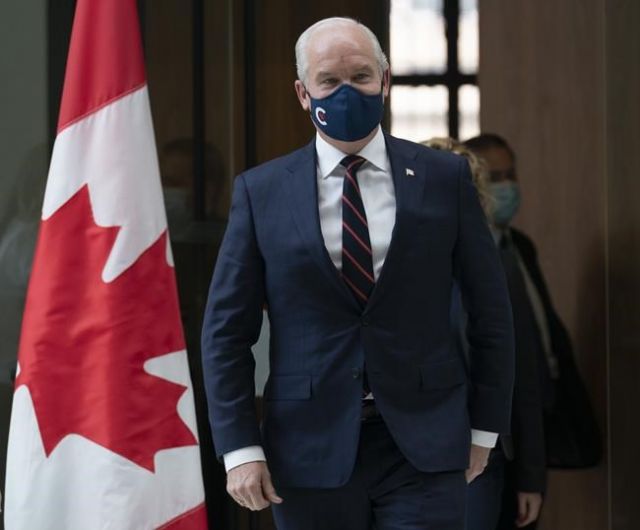 A member of the Conservative Party of Canada's national council has been suspended after spearheading an effort to trigger an early review of Erin O'Toole's leadership.

Bert Chen sat as a representative from Ontario when he started an online petition to collect signatures in hopes the council would hold a referendum before 2023.

He launched it within 24-hours of the Conservative's election defeat on Sept. 20, making it the first open question of O'Toole's tenure.

Chen says members feel O'Toole has betrayed the party's values when it comes to spending and a consumer carbon price on fuel.

Party president Rob Batherson says in a statement that the up to 60-day suspension follows complaints it received about Chen's conduct, which will be investigated.

O'Toole tried putting a more moderate stamp on the party in hopes it would gain them more voters, but doing so has irked some Conservatives because he billed himself as the "true blue" candidate to win over the party base in last year's leadership race.

In a Facebook post, Chen calls his suspension a way "to silence Conservative members that have lost confidence in the leadership of Erin O'Toole."

He says many want him removed "for selling out their beliefs for a failed attempt at power."

"I look forward to continue to represent the members that elected me in their wishes for a new leader after this 60 day period."

Batherson says a committee will look into the complaints against Chen and recommend to national council whether he acted in a way that could negatively impact its reputation or that of the leader or party.

Last week, O'Toole's caucus voted in favour of giving itself the power to oust him as leader, although for that to happen at least 20 per cent would first have to sign a written notice to force a secret ballot vote.

The Conservative leader said he believes he has the support of his 118 elected members to stay in the job and that he supports caucus having the power to review his leadership because it creates transparency.

Many MPs have offered a public show of support for O'Toole with statements on social media cautioning against rushing to replace him as leader out of concern about the message it could send to voters.

Alberta MP Shannon Stubbs is the lone voice of the group to publicly call for the party's grassroots to be able to vote on his leadership within the next six months instead of having to wait until the next national convention in 2023.

Stubbs has said she wants to know from O'Toole what he meant when he said on election night that Conservatives needed the courage to change. She said members should have a direct say on amending party policies and values.

O'Toole has not directly answered when asked whether he would try and bump up the members' planned review.