A Kelowna woman is feeling grateful to be alive after Monday's deadly crane collapse.

Still visibly shaken the next day, Kellie Orsted, who works for Lawyer Chris A. Fraser, described what happened at The Courtyard building on St. Paul Street, when the crane came crashing down Monday.

The collapse killed four workers on the Mission Group's Bernard Block job site. A fifth man in an adjacent building is presumed dead and remains buried in the rubble.

“All of a sudden I just heard this bang, and then a hole went through my wall, my chair got pushed. I ran out of the office and I told everyone to get out, and then I noticed my boss wasn’t there and I ran in,” said Orsted.

“The rubble was falling, there was smoke everywhere and I looked down. My boss had his head down and I yelled at him and he lifted it up. Then I started moving stuff. We got him out and made sure everyone was out of the building...it was bad.”

Her boss appeared physically recovered when he came by the site Tuesday, but the psychological effects could linger.

“I talked to him this morning. I asked him how he was doing and he said it’s just starting to sink in. I told him I loved him and was glad he was okay,” Orsted said.

Kellie told Castanet she heard a man screaming for help when she went back into her building looking for Fraser, but couldn’t do anything to help.

Kelowna RCMP said rescuers were planning on working with engineers on a recovery mission to retrieve the body of the man buried in the rubble.

Three of the four workers who were killed in the incident have now been identified with GoFundMe fundraisers. 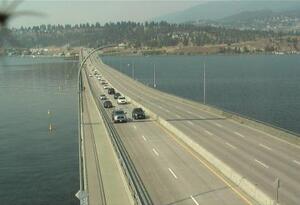