Keep the invader species out 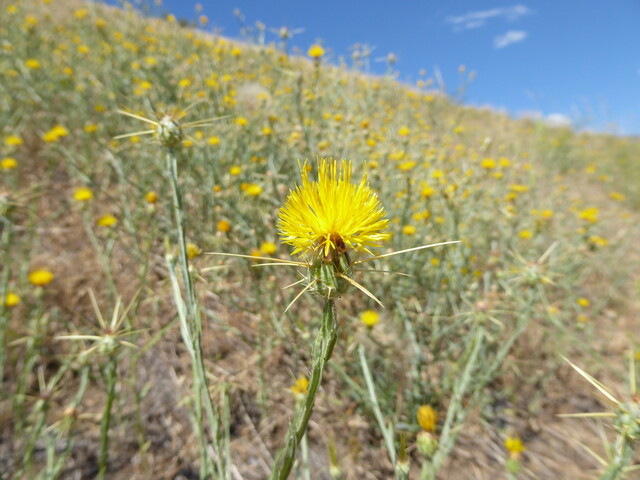 Photo: Contributed
Yellow Starthistle is one of the species OASISS works on keeping out

Invasive species throughout the Okanagan and Similkameen Valleys have been kept at bay thanks to the area’s invasive species society’s work over the past 25 years.

These plants, animals, aquatic life and micro-organisms pose a serious threat to the natural areas, overall well-being and pocketbook.

If the invaders get in, they create an imbalance in nature by competing for the same resources that native species need to survive. The economic costs associated with invasive species in Canada are measured in the tens of billions of dollars, and those costs are escalating.

"For the past 25 years, OASISS has been dedicated to protecting the Okanagan-Similkameen from invasive species,” OASISS Chair Nick Burdock said in a press release. “Our success can be attributed to the hard work and collective energies of our staff, Board and contractors, working alongside our many partners."

Preventing any new invaders from settling down is the first priority, as it is the most cost-effective way to deal with the problem. Once species are established, the task becomes far more complex and costly.

A common campaign across BC focuses on keeping invasive mussels out of the lakes.

"Globally, invasive species are the second largest threat to biodiversity after habitat loss,” Lisa Scott, OASISS executive director stated. “Our work is more important now than ever. We are ready to work with everyone, across jurisdictions, to protect natural ecosystems in the Okanagan-Similkameen for the benefit of generations to come."

To find out more on unwanted invaders and learn what you can do to make a difference, visit www.oasiss.ca for more information.