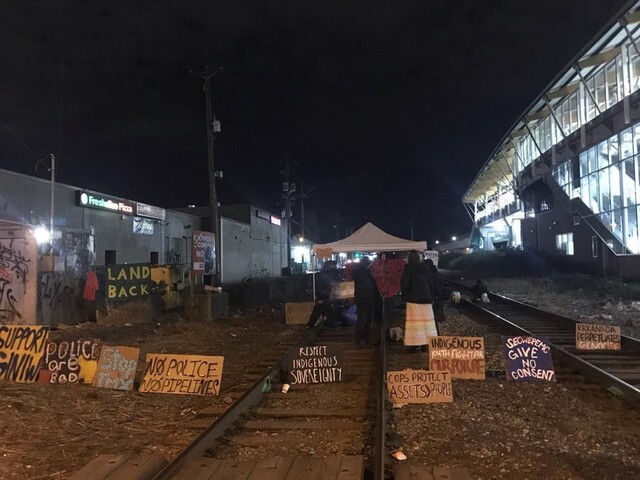 Two protesters at a demonstration that took place on rail lines in East Vancouver have been arrested for allegedly becoming violent with law enforcement.

According to a statement from the Vancouver Police Department (VPD), approximately 30 people began blocking the railway tracks near Renfrew and East Broadway around 9:30 p.m. on Friday. Demonstrators lit a fire and obstructed the tracks for several hours. On Saturday morning, officers moved to clear the tracks.

“VPD officers, with assistance from CN Police and Transit Police, allowed the group to peacefully assemble for several hours before reminding them of an existing court injunction and directing them to leave. As the protestors were being directed away from the tracks, two people allegedly became violent and were arrested,” wrote Steve Addison, spokesperson for the VPD.

A 21-year-old woman was arrested for allegedly spitting on VPD and Transit Police officers. She was later released from jail and will attend court at a later date on two counts of assaulting a police officer. A second person was also arrested for breach of peace.

The organization behind the track protest appears to be the youth group known as the Braided Warriors. The group’s members have clashed with VPD officers before. Earlier this month the group was protesting the Trans Mountain Pipeline expansion at affiliated insurance companies throughout the week in downtown Vancouver calling on them to drop the project. The recent track protest also appears to be against the pipeline expansion with signs at the demonstration reading "no police no pipelines".

According to the Braided Warriors, youth were “violently thrown to the ground, dragged across floors and down stairways, pulled by the hair and braid, thrown to surfaces covered in glass, strangled in a chokehold, and dragged face down on concrete.”

A live-streamed video from the rail line protest on Saturday morning may show the incident that led to the arrests at 13 minutes and 25 seconds in.

Vancouver Is Awesome has reached out to the Braided Warriors but has not yet heard back.