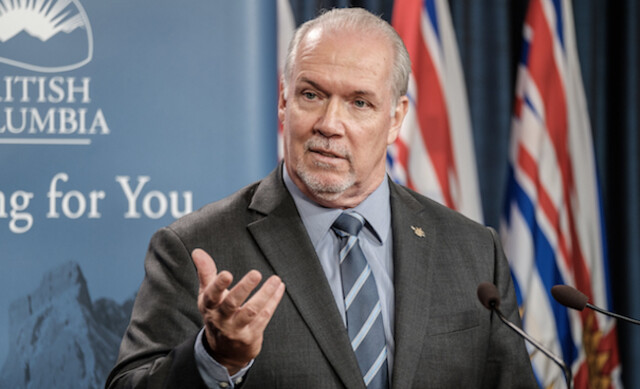 When it comes to the grey area of unlicensed cannabis stores, the provincial government strategy seems to be to plant their heads in the sand.

Last week, Premier John Horgan chose not to attend a virtual roundtable with Indigenous leaders to talk about their place in the legal cannabis industry.

A consortium of chiefs from different First Nations invited Horgan and Public Safety Minister and Solicitor General Mike Farnworth to a virtual event to discuss a path to self-determination for First Nations through legal cannabis distribution.

Neither politician responded, despite multiple attempts by organizers to secure an RSVP.

“Today, we remain on the fringes of an industry that we should have the equal right to participate in,” says Darwin Douglas, councillor for Cheam First Nation and CEO of All Nations Cannabis.

The event was set up to discuss the delays and barriers impacting their involvement in Canada’s cannabis sector. The group says it wanted to secure government guidance and support to enter the industry as legal distributors. To that end, the communities drafted a licensing proposal for government feedback and direction.

“We needed government to come to the table to help us understand how to legally participate, so we brought the table to them with this event. We even set the table with our licensing proposal, but they still didn’t come,” says Douglas.

In response, the Ministry of Public Safety declined an interview; instead, they sent a statement saying:

“the province is committed to supporting Indigenous participation in the emerging legal cannabis industry and always willing to sit down with Indigenous Nations to talk about opportunities.

“We recognize that some Indigenous Nations may have differing views with respect to jurisdictional responsibilities outlined in federal cannabis legislation, and are committed to understanding these perspectives,” says the statement.

Meanwhile, members of a loose organization of legally licensed cannabis retailers have also said they are frustrated by the province.

Under the name Class Action Cannabis, the group points to months of email correspondence that has gone nowhere over a lack of enforcement against unlicensed shops and mail order marijuana sites.

The emails obtained by the oz. show retailers have been trying to work with officials. They’ve communicated their concerns with both the RCMP’s Community Safety Unit and the BC Liquor and Cannabis Regulation Branch — but they’re bounced back and forth as government defers to the RCMP and police defers to the government.

And nobody claims responsibility.

“If you have not spoken to the MLA or MP about your concerns that may be an option as well,” says one RCMP staff sergeant in the email chain.

Yet, an email from Farnworth says it’s not up to him.

“The province does not provide operational direction to police forces,” he states.

Farnworth told them he’s “sympathetic to the alleged impacts” on their business, and he acknowledged storefront and online illegal operators are an ongoing problem.

However, he rejected proposed financial aid measures to help legal stores, saying it would be impossible to determine which particular legal retail operators are actually impacted.

The RCMP did not responded to a request for comment.