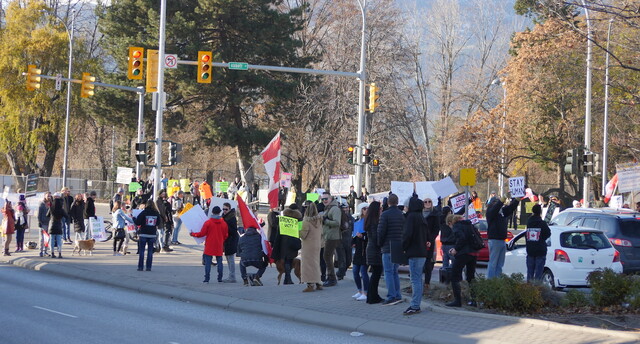 Hundreds of people once again gathered in downtown Kelowna Saturday to protest the province's COVID-19 restrictions that have been put in place, as cases and deaths continue to skyrocket in the province and across the country.

Signs reading “Keep your laws off my face,” “Fear is the virus,” “Unmask B.C.,” “Honk 4 Freedom,” “Do your own research,” “No masks no vaccines” and “The real virus is communism” were waved on the corner of Abbott Street and Highway 97 Saturday afternoon, as some passing motorists honked in support.

Both young and old took part in the protest, and despite the large number of people in close proximity to each other, it appeared that no one was wearing a mask.

The demonstration has become a weekly event, beginning at Stuart Park before the large group walked to the highway. The number of participants has grown substantially this week.

The event comes as the number of COVID-19 cases in B.C. and across the country continue to rise sharply, along with deaths. In the last week, more than 5,400 people in the province were diagnosed with COVID-19 and 64 British Columbians died.

Provincial Health Officer Dr. Bonnie Henry and the B.C. government imposed an indoor mask requirement earlier this month, in an attempt to slow the transmission of the virus. Echoing a slogan from Donald Trump's 2016 U.S. election campaign, one sign at Saturday's protest called for Dr. Henry to be “locked up,” while another stated she was a liar.

Many Canadian flags were being waved during Saturday's protest. Meanwhile, an average of 76 Canadians are dying of COVID-19 every day. 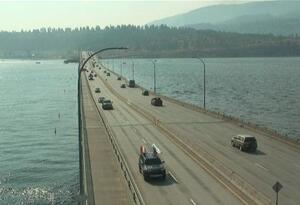