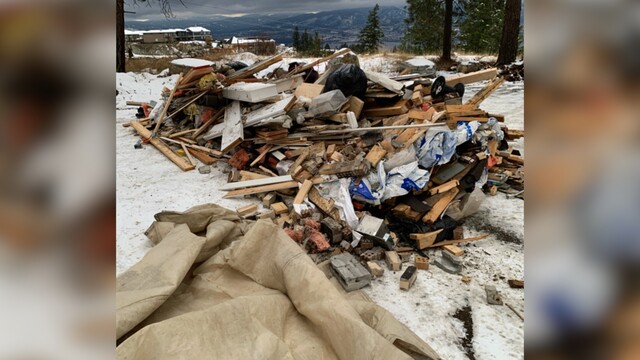 A Kelowna resident is shocked after coming across a large amount of illegally dumped garbage on the side of a road Thursday morning.

Colin Fitchett says he was walking his dog at around 7 a.m. on Upper Mission Drive through the small parking lot leading to Gillard Forest Service Road, which is where he found all the trash.

“It’s just a big, giant pile of construction waste … anything from electrical wires to insulation, framing, there are doors in there,” explains Fitchett.

He says the road is very well used.

He says they walk their dog in that area daily and the dumped items were not there on Wednesday, so he assumes it was done overnight.

“It’s absolutely terrible. It’s hard to believe somebody would do that, honestly.”

Fitchett hopes somebody will recognize their mistake and fix it.

"Somebody now has to pick that up, somebody’s got to take that all out of there - wherever that cost falls on volunteers.”

The Okanagan Forest Task Force has reported a surge in illegal dumping activity during the pandemic.