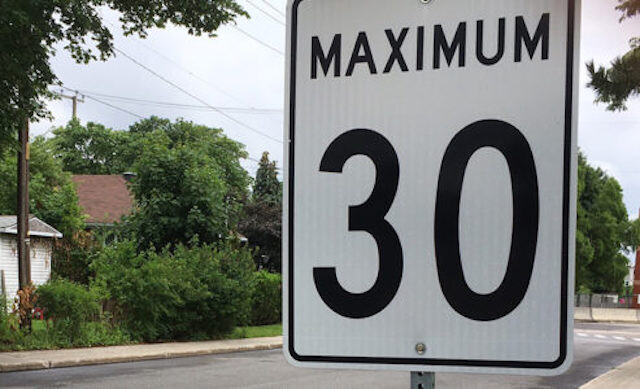 Currently the B.C. Motor Vehicle Act sets a speed limit of 50 km/h on municipal streets when a different speed limit has not been posted by signs.

A recent survey by Research Co. found that 58% of British Columbians would definitely or probably like to see residential speed limits of 30 km/h. This past fall the Union of B.C. Municipalities resolved to ask the Minister of Transportation and Infrastructure to amend the Motor Vehicle Act to allow municipalities to set this blanket speed limit.

Municipalities already have the power to implement 30 km/h speed zones anywhere within their boundaries through the use of signs. The amendment would save the effort and expense of installing more signs.

There are five justifications to make the change in this resolution:

The provincial government surveyed municipalities in 2015 as part of the Road Safety Strategy. Not surprisingly, the top two issues of concern reported were vehicle speeds and pedestrian safety.

What should be surprising is that the survey also found that formal municipal road safety program components are rare. Less than one third have a formal mandate to improve road safety and few have developed visions, plans or targets.

Less than half of municipalities have committees with a road safety mandate or road safety improvement programs or projects.

Of nine potential sources of road safety data suggested, most municipalities relied on public comments and complaints instead of something like a Sustainable Transportation Assessment for Neighbourhoods.

Residents usually request traffic calming changes on their streets to remedy safety issues. Municipalities such as Maple Ridge, North Cowichan and West Kelowna do have policies in place for this. They follow the Canadian Guide to Neighbourhood Traffic Calming produced by the Transportation Association of Canada. It's expensive to buy and is not available to read for free on line or in my local library so we can to refer to chapter 2 of the B.C. Community Road Safety Toolkit instead.

What do you think our provincial government's response to this request will be?

This story also appears on DriveSmartBC.