Highway 97 is back open north of OK Falls, after being closed for more than three hours due to the Green Lake Road wildfire.

OK Falls fire chief Rob Oliver says the exact cause of the Green Lake wildfire is not yet known, but says the point of origin was adjacent to Green Lake Road, near the turnoff to Highway 97.

The fire remains estimated at seven hectares in size and is being actioned by the OK Falls and Kaleden fire departments as well as the BC Wildfire Service.

Oliver says winds have changed directions and pushed the fire back onto itself in some areas, and pointed out cooler temperatures were aiding the fire fight as the sun was setting.

The Green Lake Road wildfire burning on the west side of Okanagan Falls is now seven hectares in size.

BC Wildfire Service personnel continue to respond alongside the Okanagan Falls fire department, working to build a fireguard and establish hose lay.

Highway 97 remains closed in both directions one kilometre north of Okanagan Falls.

An estimated time of opening currently not available.

DriveBC reports that Highway 97 is closed in both directions one kilometre north of Okanagan Falls because of a brush fire.

No detour available at this time and an estimated time of opening is currently not available.

An assessment is in progress.

Multiple fire crews are responding to a new fire start near Okanagan Falls.

Submitted photos show the blaze is burning just west of Green Lake Road, near the turnoff from Highway 97.

The OK Falls Fire Department is on scene and the BC Wildfire Service is responding with ground crews, helicopters and air tankers.

Several Castanet readers say the blaze appears to have grown quickly since it began, and smoke is visible from a far distance.

More information when it becomes available. 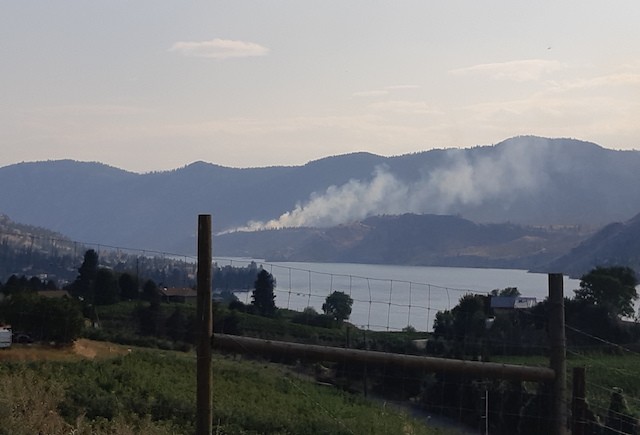 Photo: Contributed
Smoke from a wildfire near OK Falls from the east side of Skaha Lake.