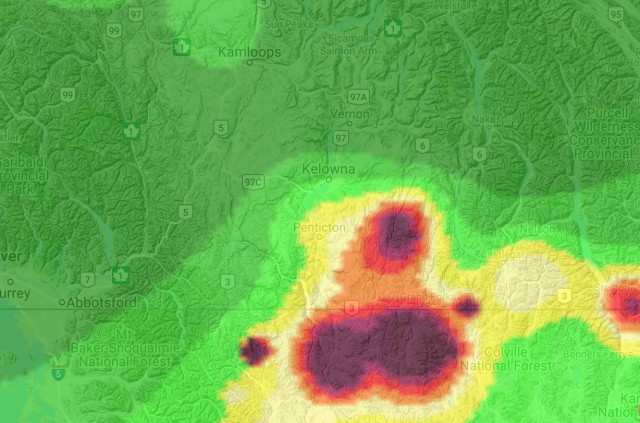 Photo: firesmoke.ca
Smoke is expected to linger in the province's Interior for the foreseeable future.

For those waiting for the smoke in the Valley to clear, don't get your hopes up.

“As long as those fires continue to burn and this weather pattern refuses to change, that smoke isn't going anywhere,” said Matt MacDonald, meteorologist with Environment Canada.

A ridge of high pressure is currently sitting above much of the province, acting as a “capping lid," keeping smoke in place in the lower atmosphere.

“Once that smoke gets in there, it's really hard to mix it out,” MacDonald said. “We're not seeing any weather systems coming at us over the next few days to provide some wind and some mixture to what we call the boundary layer.

“What you see is what we're going to be getting for the foreseeable future.”

MacDonald says there are so many wildfires burning across the province, it's tough to pinpoint where exactly all the smoke it coming from.

“Given that there are wildfires burning in every direction, even if we see a slight change in the winds, it'll just mean a change in which wildfires are delivering the smoke,” he said.

“Last summer it was fewer but larger fires, and this year they're slightly smaller but there are just fires burning in all four corners of the province."

There is a slight glimmer of hope in the forecast though with an expected change in winds come Monday.

“That may help mix out the winds in the Valley bottom, but I wouldn't expect a wholesale change in the airmass, it may just provide some slight improvements,” MacDonald said.

While the poor air quality is most dangerous to the elderly and young children, healthier people are still encouraged to avoid physical exertion outside. 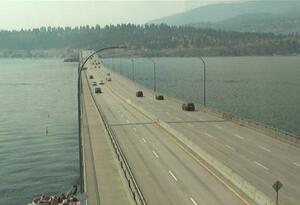