A wildfire burning on the side of Okanagan Mountain Provincial Park has grown to 200 hectares in size.

As of 8:30 p.m., the BC Wildfire Service says the fire has increased in size and activity.

The fire is currently not an interface fire, but there are two homes on the lake just a short distance away from where the fire is burning.

Airtankers were called to this wildfire on Tuesday and will be responding Wednesday as needed as well as resources on the ground.

“It’s working its way towards Kelowna, we can see the flames now,” he said. “I can see flames making their way along and its moving pretty quick.”

Another resident called Castanet News and said police are blocking off Lakeshore Road and Uplands Drive, but police wouldn’t comment if it was due to the fire.

- with files from Alanna Kelly

The Good Creek wildfire continues to burn above Rattlesnake Island and is 0.1 hectares in size.

A Castanet viewer says the fire is showing new seeding at the north edge of the island.

Flames are visible from the hill as well as large plumes of smoke blowing across the Okanagan.

Residents in the area say wind is picking up.

Several water bombers and air tankers are attacking the fire.

The same hills were charred by a wildfire during the infamous 2003 Okanagan Mountain Park fire.

A fifth wildfire has been reported in West Kelowna.

Mount Drought is an estimated 0.10 hectares in size.

BC Wildfire is on scene.

Castanet crew are headed out on Okanagan Lake to check out the status of multiple wildfires sparked last night and today.

Reporters Alanna Kelly and Nich Johansen will be boating the perimeter with live video coverage to come.

A helicopter is picking up water from Okanagan Lake, just off Antlers Beach, Wednesday afternoon. It appears to be bucketing the Peachland Creek wildfire, which is burning in the hills above Peachland near Brenda Mines Road.

Residents along Antlers Beach say winds are gusting and the fire continues to grow close to homes.

No areas have been forced to evacuate at this time. 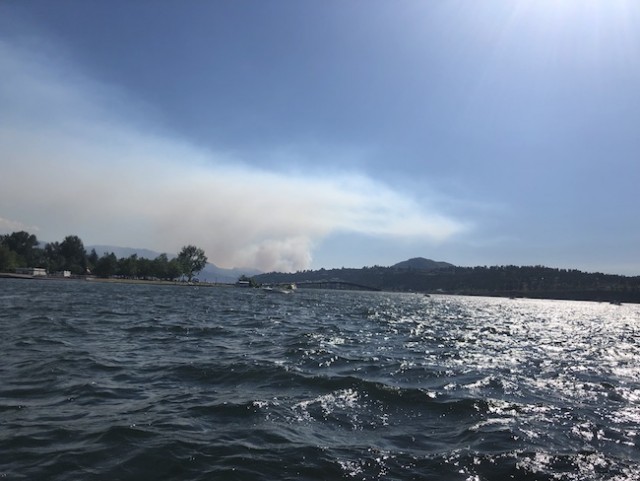