The B.C. Wildfire Service says the Mount Eneas wildfire has grown to 200 hectares.

The fire has brought Highway 97 down to one-lane-alternating traffic, with an RCMP escort through the fire zone. The blaze appears to have jumped the highway in some areas.

Several addresses near the fire have been ordered to evacuate.

Planes are currently bucketing the Peachland Creek fires and the Monroe Lake fire.

Candling is visible from Lake Okanagan by the Mount Eneas fire that is now an estimated two hectares in size.

A helicopter is circling the area BC Wildfire says the fire is burning in deep terrain.

The Good Creek fire is 0.1 hectares in size air tankers are responding as needed according to BC Wildfire.

The BC Wildfire Service has finally provided an update on a number of lightning-caused fires throughout the Central Okanagan.

Fire information officer Nicole Bonnett said mapping indicates three fires burning in, and around Peachland are all about two hectares in size. These include the Mount Aeneas fire burning just above Highway 97 south of Antlers Beach, Monroe Lake and Peachland Creek fires.

Despite a large amount of visible smoke and some flames, BCWS is considering the Good Creek fire at the base of Okanagan Mountain Park to be just a spot fire.

Bonnett said BCWS has yet to expend resources on the fire. She says they have been keeping an eye on it and will send resources when they are needed.

She says with the number of fires from Tuesday's thunderstorm, resources are being brought in from other regions of the province, and will be deployed where needed.

In West Kelowna, three spot fires have broken out on Carrot Mountain. One of those is already under control. Three-member crews are heading to the other two.

The Law Creek fire south of Glenrosa is pegged at just 0.1 hectares

A helicopter is picking up water from Okanagan Lake, just off Antlers Beach, Wednesday afternoon. It appears to be bucketing the Peachland Creek wildfire, which is burning in the hills above Peachland near Brenda Mines Road.

It's unclear if the fire is threatening any structures at this time. Castanet's Wayne Moore, who's currently in the area, says black smoke is coming from the blaze.

The largest of the three fires appear to be the Mt. Eneas fire, burning just south of Antlers Beach.

Moore says two branches of the fire have grown from it, and it's producing the most smoke in the area.

He says he hasn't seen any aircraft fighting the Mt. Eneas fire at this time.

The Munro Creek wildfire, meanwhile, is burning a little farther north, just west of Antlers Beach. It appears to be burning farther from Highway 97, and is producing less smoke.

Across the lake, the Good Creek wildfire is burning above Rattlesnake Island in the hills that were charred by fire during the infamous 2003 Okangan Mountain Park fire. BC Wildfire Crews do not appear to be fighting the Good Creek fire at this time.

The BC Wildfire Service has yet to provide an update on the size of these fires.

Despite the fires surrounding Antlers Beach, it hasn't stopped sunbathers from enjoying the hot sun and cool water. 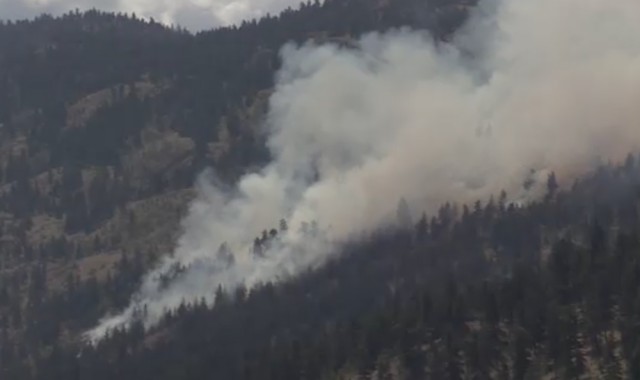