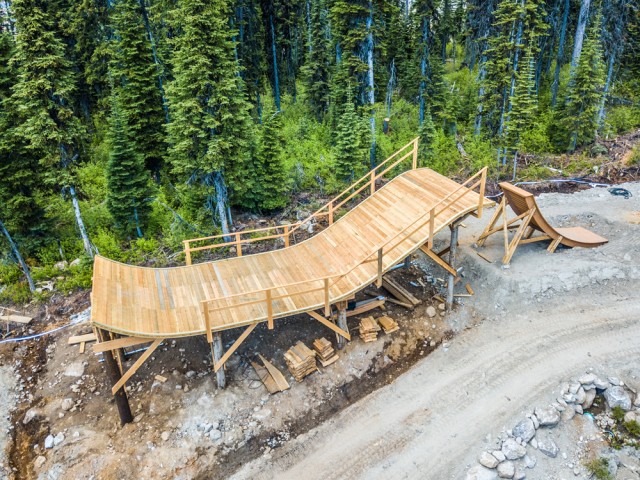 The final touches are being put on the course that will play host to the Big White Invitational Slopestyle.

More than two dozen competitors from around North America and Europe will begin descending on Big White Tuesday for the five-day event.

Athletes will test the two tracks beginning Wednesday with the Bronze competition set for Thursday and the Gold event Saturday.

Work on the course began nearly two months ago while there was still snow on the ground.

“Being on site when snow was still falling from the sky was an interesting challenge for us in the early stages,” said Alexander Chisholme, one of the course designers from LOFT Bike Parks.

“It was also challenging because we had never seen the site beforehand and there were some preliminary decisions we had to make prior to arriving, but the help of the Big White team and the warm weather throughout May combined to make to process relatively seamless for the build.”

The biggest feature of the gold course includes a 15-foot gap on and a 25-foot gap off.

Designers said they built it to allow riders to do some of their harder tricks, which are not see too much on the competition circuit.

Prior to the whale tail, two jumps welcome the riders. An 11-foot tall classic jump, then a 13-foot tall jump with a 20-foot gap, allowing riders the most 'air time' for their biggest tricks.