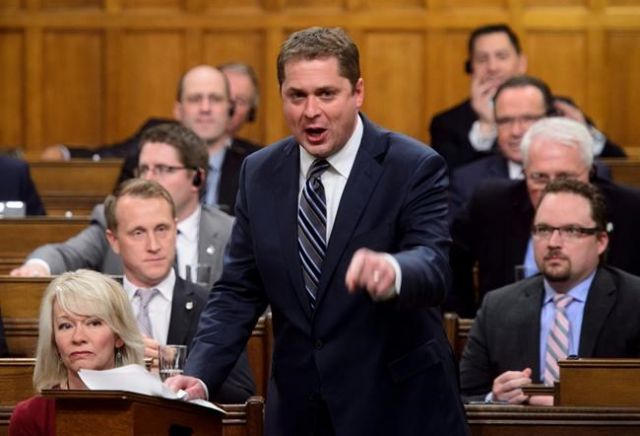 The federal Liberal government found itself taking fire over the stalled Trans Mountain pipeline expansion from opposite flanks Wednesday: accused of helping to finance pipeline protesters on the one hand, and rigging the review system in favour of the project on the other.

Conservative Leader Andrew Scheer led off question period with the revelation that one of the successful applicants to the government's Canada Summer Jobs program is a B.C. group looking to hire someone "to help ... stop the Kinder Morgan pipeline and tanker project."

"Does he not realize that he is funding the very groups that are protesting against the project that is in the national interest?" Scheer demanded.

"We are talking about taking tax dollars from people who are out of work in the energy sector and giving it to people who are trying to block a project in the national interest."

The B.C. group, Dogwood, however, has been receiving federal money for years — including from the previous Conservative government, Trudeau retorted.

"Unlike, apparently, the leader of the official Opposition, we believe in free speech," he said.

Scheer's question was far from the only Trans Mountain offensive the Liberals faced — indeed, question period has, of late, been dominated by the project, given what proponents say of its potential economic impact, as well as how it's likely to influence next year's federal election.

Kinder Morgan declared earlier this month it was halting all non-essential spending on the controversial expansion, which has been beset by protests and is at the centre of a fierce dispute between the governments of B.C. and Alberta.

The expansion — which B.C. is blocking — would twin an existing pipeline from Alberta's oilsands to Kinder Morgan's Westridge Marine Terminal in Burnaby, where diluted bitumen would be loaded onto tankers.

Earlier Wednesday, NDP Leader Jagmeet Singh and energy critic Guy Caron released a letter to Trudeau effectively accusing the Liberals of having decided to proceed with Trans Mountain well before the federal review process had completed its evaluation.

The letter cites recent media reports suggesting the government's decision to proceed was a purely political calculation, rather than a decision based on whether or not the project would indeed be in the national interest.

"These revelations throw into question the legitimacy of the government's entire review as they point to an approval based on political interests," the letter reads.

Caron pressed the issue during question period, but Trudeau waved off the NDP's concerns.

"Under the previous government, the approach of not understanding how important it is to properly consult and engage in acquiring social licence needed to be fixed," he said.

"We actually added additional steps to make the process more rigorous. In fact, we extended the consultation process to ensure we were meeting and exceeding our responsibility to engage with and consult Indigenous people."