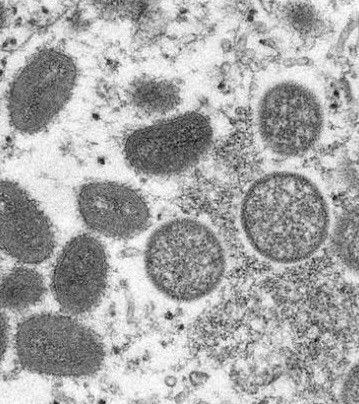 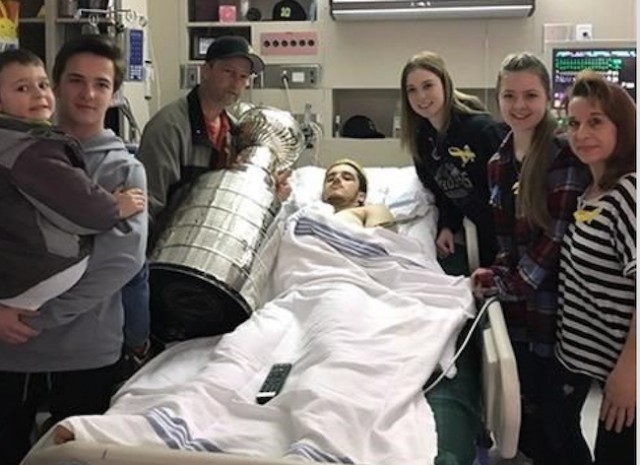 Photo: The Canadian Press
Ryan Straschnitzki, centre, poses with brothers Connor, left to right, and Jett, father Tom, girlfriend Erica, sister Jaden and mother Michelle as they pose with the Stanley Cup at Royal University Hospital in Saskatoon in this recent handout photo. The Stanley Cup has visited the hospital bedsides of Humboldt Broncos who survived a deadly bus crash.

The Stanley Cup has visited the hospital bedsides of Humboldt Broncos who survived a deadly bus crash.

Tom Straschnitzki, whose son Ryan Straschnitzki was badly injured in the crash, says he was in a waiting area at Royal University Hospital in Saskatoon on Friday night when a large box was wheeled in.

Recognizing the box from Stanley Cup presentations, he immediately suspected what was inside, and his suspicions were confirmed when someone wearing white gloves lifted the trophy from the case.

Tom Straschnitzki says Ryan's bed was the first stop, and he says his son's eyes grew wide as it was carried in.

He says Ryan asked to see the name of Jonathan Toews, the Chicago Blackhawks forward who visited the hospital earlier in the day to deliver jerseys the Blackhawks and Winnipeg Jets wore last weekend with Broncos nameplates on them.

Tom Straschnitzki says Ryan was asked if he wanted to touch the cup, but he wanted to wait until he wins it someday.

"They know the tradition," Tom Straschnitzki said, noting the other injured players didn't want to touch the trophy, either.

Sixteen people have died as a result of a crash last week when the Broncos' bus collided with a semi truck just south of Nipawin, Sask. Another 13 people were injured.

Ryan Straschnitzki, a 19-year-old defenceman from Airdrie, Alta., couldn't feel his legs after the crash, his family said.

Tom Straschnitzki said as soon as people saw the cup, they asked whether it was the real one or a replica.

But he said it was the real thing.

"It really lifted their spirits."