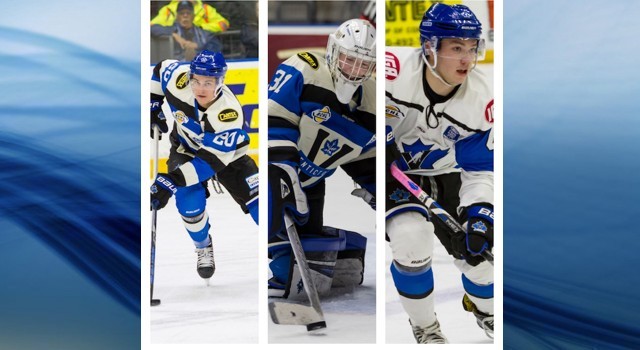 Three Penticton Vees have been voted as BCHL all stars, the team announced on Wednesday.

Defenseman Jonny Tychonick was chosen as a first-team all star, while goalie Adam Scheel was voted a second-team all star and defender Nicky Leivermann was voted for the all-rookie team.

Tychonick had a breakout season with nine goals and 47 points in 48 games — more than double his point total of 23 as a rookie last season. He and Leivermann both won gold with Team Canada West at the World Junior A Challenge in December.

Tychonick is committed to play at the University of North Dakota next season, and will likely be drafted in the first two rounds of the NHL draft this June.

Scheel, also committed to play at UND next year, led all BCHL goalies with 29 wins this season. His 2.08 goals-against average was second and his .927 save-percentage was fourth. Scheel is also expected to be selected in this June's NHL draft.

Leivermann had 10 goals and 37 points in 43 games in his first season of playing Junior A. He was a sixth-round draft pick by the NHL's Colorado Avalanche last year, and is committed to play at the University of Notre Dame next season.

The awards were selected by the league's play-by-play broadcasters. The entire list of league all stars can be found here.