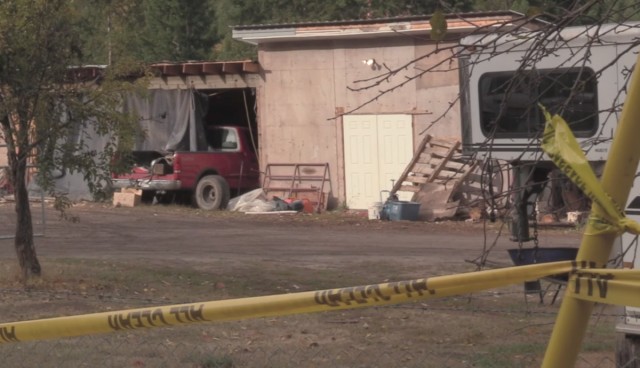 Photo: Darren Handschuh
Human remains have been found at a rural property north of Vernon.

After three days of extensively searching a rural property in the North Okanagan, police have confirmed they have found human remains.

On Thursday, dozens of officers swarmed the farm at 2290 Salmon River Road, northeast of Falkland, and they've continued the search into the weekend.

“During the course of executing a search warrant at a property in the 2200 block of Salmon River Road, human remains have been located,” Cpl. Dan Moskaluk said Saturday in a statement.

“This matter is being treated as suspicious at this time."

While police have yet to elaborate on what prompted the search, it may be related to an incident in late August.

On Oct. 13, police put out a warning to the public about an incident on Aug. 28, where a 36-year-old man allegedly arranged a meet-up with a prostitute in the Salmon River Road area, and threatened her with a gun, before she escaped.

Police arrested the man at the time, but he was later released without charges.

A Canada411 search of the rural property where the human remains were found turns up Wayne Sagmoen.

A Curtis Wayne Sagmoen, born in 1980, has been recently charged with six charges stemming from an Aug. 27 incident near Falkland, including intentionally discharging a firearm and uttering threats.

A warrant was issued for Sagmoen's arrest on Oct. 17, and he was arrested the following day.

Last year, three women went missing in the North Okanagan, and they've yet to be found, but a family member of one of the missing women says police have contacted him and said the search was not related to their disappearance.