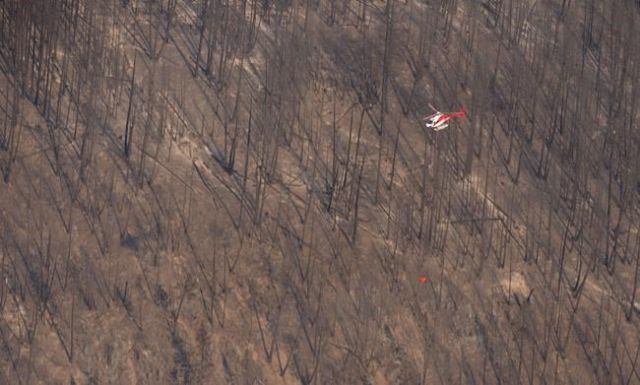 Photo: The Canadian Press
A helicopter carries a water bucket at the Philpot wildfire east of Kelowna.

Wildlife experts are warning British Columbia's severe wildfires could make bears even more troublesome as they fatten up before hibernation.

Wildsafe B.C. provincial co-ordinator Frank Ritcey says there is always increased conflict between bears and humans in autumn, as the bruins search for food.

He predicts this fall will be particularly challenging because huge swaths of the province have been charred by wildfires, killing the berries and grasses bears rely on.

Residents with gardens and fruit trees are advised to harvest early and often, while garbage cans should be kept secured and indoors until just before pickup.

The warning comes as BC Wildfire Service spokesman Kevin Skrepnek predicts the province's wildfire season could stretch into the fall because continued hot, dry weather is forecast over southern B.C.

He says the province has spent $404 million fighting fires that have scorched 10,600 square kilometres of timber, bush and grassland since April 1, the greatest area the province has lost to wildfires in a single season.