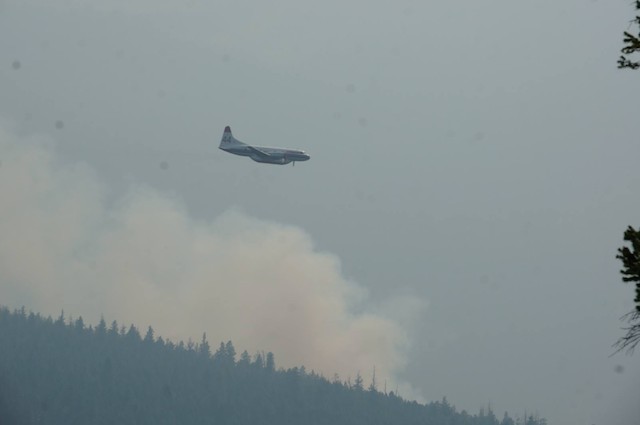 DriveBC reports that Highway 97 reopened at the Monte Lake fire shortly after midnight.

The main fire is now estimated at 3.5 hectares in size.

The others are all spot fires along the side of the highway.

The B.C. Wildfire Service is now reporting four fires at the south end of Monte Lake.

The main fire is two hectares in size, while the other three are small spot fires, each estimated at 0.1 of a hectare.

All of them are believed to be man caused and are along Highway 97.

The highway is reduced to single-lane, alternating traffic, and is pilot car controlled.

The new fire at Monte Lake is estimated at two hectares in size.

The BC Wildfire Service has 26 firefighters fighting the blaze, along with air support from three helicopters.

"The air tankers have completed their objectives and have returned to Kamloops," said Rachel Witt, BC Wildfire Service spokesperson.

The air tankers have laid fire retardant around the perimeter of the wildfire, she explained.

"No structures are threatened," said Witt, who added that no evacuations have taken place for this wildfire.

DriveBC reports Highway 97 is now closed in both directions at the scene of the new fire.

Ground and air support are headed to a new wildfire burning at Monte Lake.

"This is rapidly developing. We have six firefighters and a helicopter and other air support heading to the scene," said Rachel Witt, BC Wildfire Service spokesperson.

Witt said the size of the fire was not yet known.

A new wildfire is burning at Monte Lake about eight kilometres south of the original fire, confirmed Bob Smith of Monte Lake Resort.

"I can see flames. It's about a half mile from here," said Smith. "We're just getting ready to get out if we have to."

Helicopters were flying over the fire which was racing up the hill on the east side of the highway.

Smith said he had not seen any actioning on the wildfire yet.

"It doesn't look terrible right now. It seems to be going up the hill."

Smith said there were few structures nearby except the resort.

The Martin Mountain wildfire at Monte Lake is 100 per cent contained but firefighters remain at the scene.

“No, it's not out,” said Max Birkner, BC Wildfire Service spokesperson Monday. “We have 75 firefighters working on the fire. They are using water tenders as well as heavy equipment. Air support is on standby.”

With the wildfire fully contained, the last evacuation order for properties along Kristianson Road was rescinded Sunday night although a number of residences in the Monte Lake area remained on evacuation alert.

At least one house is known to have been destroyed. A Gofundme campaign for the family raised more than $15,000, the web page shows.

"We've also been shown such compassion and empathy from others affected by the fires this summer. This afternoon a 100 Mile evacuee who lost her farm to the wildfires dropped off a care package for our girls from her six-year-old sons. There are no words," the family said in a statement.