The Regional District of Okanagan Similkameen has lifted the mandatory evacuation order for all 18 properties impacted by the wildfire.

However, an evacuation alert remains in effect for 186 properties, comprising of the entire south half of Kaleden.

An estimated 100 homes were evacuated voluntarily as the fire was spreading, with a total of 234 individuals registered with Emergency Social Services.

The RDOS is asking non-residents to stay away from the south end of Kaleden, as parked vehicles can delay first responders fighting the fire.

Kaleden Fire Chief Denis Gaudry says it will be “days” before they will confidently be able to say the fire is completely out.

“We are doing mop up on it from the perimeter in, you won’t see much smoke, but there is lots of sort of hidden spot fires,” Gaudry said.

The Fire Department will be taking a look at the 18 homes under a mandatory evacuation order this afternoon and making a decision on if residents can return home.

In addition to the one home and one out-building, Gaudry said they may learn of additional losses of sheds and other outbuildings once residents return home.

“The things is, we are in extreme fire danger, if we get wind on it this afternoon, we could get relights,” he said.

The Kaleden Fire Departments will continue to work the fire all day, cleaning up hot spots.

Last night, residents of the around 100 homes that were voluntarily evacuated were allowed back to their homes. It’s not clear when the remaining 18 evacuation orders will be lifted.

The B.C. Wildfire Service remains engaged in a support role.

Castanet News has a reporter at the scene and will update throughout the day.

The BC Wildfire Service will have just seven personnel on the lines at the Kaleden wildfire Wednesday. Overnight, 38 provincial firefighters worked the fire, which is officially described as 'held.'

Fire information officer Max Birkner reminds people the fire is under the command of local fire departments. The BC Wildfire Service is there for support.

As of late Tuesday, the Kaleden wildfire was considered "held" at 6.5 hectares in size.

The blaze, which has destroyed at least two structures, was being monitored for hot spots and flare-ups overnight by 38 firefighters.

With current resources and conditions, the fire isn't expected to grow – but if the wind picks up, "all bets are off," officials told CTV.

The fire started along Oak Avenue in the South Okanagan community, and 18 homes were under an evacuation order overnight. A full list of the impacted addresses can be found here.

An additional 165 properties, comprising the entire southern half of Kaleden, are under an evacuation alert and should be prepared to leave on short notice.

Evacuees are asked to register with Emergency Social Services at the Penticton Community Centre. 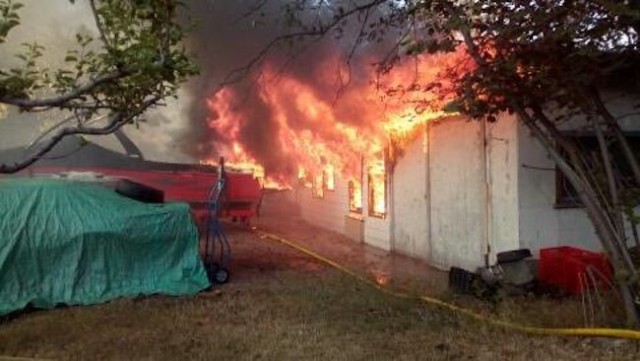