A tragic head on collision, at the south end of Duck Lake on Hwy 97, took the life of a Manitoba woman this morning.

At just before 8:30 a.m. emergency crews were called to the scene and found a pickup truck engulfed in flames and on its side, and a white sedan with severe front end damage.

According to witnesses the Dodge pickup was travelling southbound in the fast lane and was observed slowly "veering" across the painted median and into the path of a northbound White Ford sedan, who tried to avoid the pickup.

The force of the head on impact caused the pickup to roll in the northbound lane, coming to rest on the passenger side.

The pickup caught fire and passersby were able to get the pickup driver, a 33 year old Comox area male, out of the vehicle as it burned. The occupants of the white sedan, a man and woman from Manitoba both in their 60s, were trapped and needed to be extricated by Fire crews using the jaws of life.

The female passenger succumbed to her injuries and perished at the scene.

The pickup driver was taken to Kelowna General Hospital for treatment of non life threatening injuries and the driver of the black Pontiac was uninjured.

The driveshaft of the flipped truck broke free and smashed into the front-end of a third vehicle. The occupants were uninjured, but their vehicle sustained heavy damage.

Hwy. 97 was closed in both directions as two RCMP Traffic Analysts attended to investigate the scene. Traffic flow was restored at 1:15 p.m.

Police believe speed may have been a factor and are investigating to find out why the pickup crossed into the oncoming lane. To that end, Police are asking anyone who witnessed the collision or was travelling southbound at the time of the collision, to contact Cst. Prommer, Central Okanagan Traffic Services at 250-980-5353. 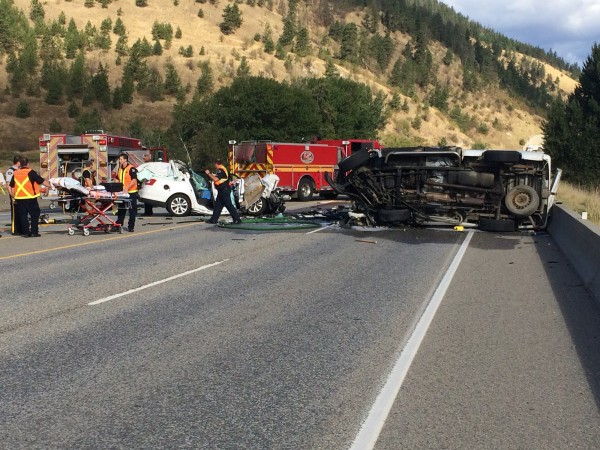 The crash has been cleared and Highway 97 is open once again.

DriveBC estimates the highway will reopen at 1:30 p.m.

Traffic is now inching along Glenmore Road, although it is still bumper to bumper up to Cross Road.

The latest from DriveBC is that RCMP are still assessing the scene and there is still no estimate of when the highway will reopen.

Callers are telling Castanet that traffic is now backed up into Glenmore. Drivers trying to use that route to get through may find that it's all blocked up there and that traffic does not appear to be moving in either direction.

Another caller said she is stuck in traffic and that all side streets and detour routes appear to be blocked.

If you have information about which routes are moving, please send to [email protected]

A multi-vehicle accident has closed Highway 97 near the airport north of Kelowna.

Emergency crews responded to the incident around 8:30 a.m. The highway is currently closed in both directions and there is no apparent detour.

It appears one of the vehicles crossed the centre line, colliding head on with an oncoming car. The impact flipped one of the vehicles on its side where it burst into flames. It appears the driveshaft of the flipped vehicle broke free and bounced down the road, smashing into a third vehicle.

There are unconfirmed reports that one person has passed away in the incident. Two others are in hospital with unconfirmed injuries.

Three ambulances, one rescue vehicle, one fire engine and RCMP attended the scene. 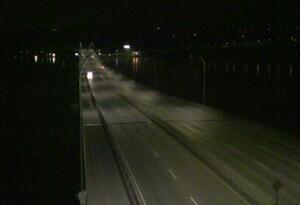