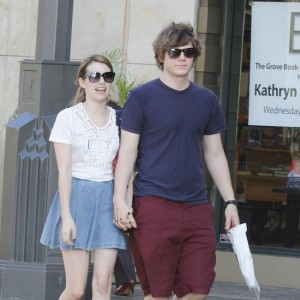 The couple - who star opposite each other in 'American Horror Story' - are set to tie the knot after Evan proposed with a pink, gold and diamond ring over the Christmas period in New York City, according to Extratv.com.

The couple then celebrated their happy news by spending New Year in London.

Emma, 22, and Evan, 26 first met on the set of film 'Adult World' and he says they were instantly attracted to each other, even though they didn't get together until 2012.

He said: "I think we both had crushes on each other but we didn't know it. As soon as the movie was done we started hanging out and everything was perfect.

"She's amazing. She's so much fun. She has a great laugh, smile, she's a great kisser. And she's gorgeous."

However, the path of love has not always been smooth for the couple, as in July last year Emma - niece of actress Julia Roberts - was arrested when they had a fight in Montreal, Canada which left him with a bloody nose and a bite mark, and her with bruised legs.

The police had intervened after somebody else in their hotel had called for help, but Emma was released without charge.

The couple didn't break up over the incident, and friends later claimed they have a "pretty extreme" relationship but were "crazy in love" with each other.

A spokesperson for Emma said at the time: "It was an unfortunate incident and misunderstanding. Ms. Roberts was released after questioning and the couple are working together to move past it."